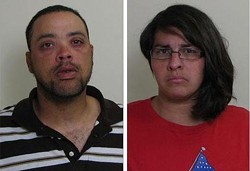 Sean Starwalt and his girlfriend, Patricia Cage, allegedly ate fast-food as her child slowly bled to death.
According to testimony from his cellmate, Sean Starwalt fatally beat his girlfriend's four-year-old child last September because the boy got in the way of Starwalt playing a video game.

But it gets even worse.

One of Starwalt's neighbors in South Roxana, Illinois, saw the child, Jeremiah Bradford, in great distress after the beating and urged Bradford's mother, Patricia Cage, to take the boy to the hospital right away. Cage and Starwalt promised to do so.

Instead, prosecutors say the couple drove to a McDonald's and ate dinner. After they returned home, Jeremiah reportedly vomited though the night.

The next day the couple at last decided to take the child to the hospital. He died along the way of internal bleeding. Authorities say Jeremiah could have survived if he'd been admitted to the hospital right away.

Yesterday, Starwalt, 34, pleaded guilty to first-degree murder, after initially telling investigators that the boy injured himself jumping and falling off the couch. Patricia Cage, 35, is also charged with first-degree murder for covering up the beating and failing to get the child medical attention. Her trial is pending.

Since their arrests last year, Starwalt and Cage have had their own child together. The baby is in the custody of the Illinois Department of Children and Family Services.