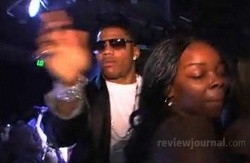 Yesterday, The Las Vegas Review-Journal published an expose on the infamous exploits of NFL football player Adam "Pacman" Jones at a sin city strip club two years ago. The action, which took place during NBA All-Star week, led to a massive brawl (Jones allegedly punched a stripper) and a shooting in the parking lot, for which Jones was also allegedly responsible. And you thought the All-Star festivities in St. Louis were crazy.
But never mind all that. You probably already know all about Jones (he played for the Dallas Cowboys last year) and his troubles (the team released him after he attacked his own bodyguard.) What you might not have known, however, is that St. Louis' own hip-hop icon was on-stage with Pacman at Club Minxx that night and packing a paycheck's worth of dollar bills.
Nothing ties together an investigative report on a strip club shooting like a video of two superstars making it rain and that's exactly what the Review-Journal is pimping on their Web site right now. (Embed disabled, obviously, click here to check it out.)
Nelly appears briefly at the very end of the clip, which was filmed by "an unknown strip club 'guest' on February 19, 2007." Then he decides it's probably not a great idea to have a video of him on-stage with 50 Vegas strippers and wags his finger to the cameraman, who promptly cuts out the footage. Still, you get a glimpse of this impressive stack of bills: 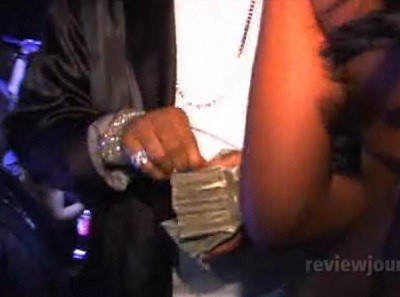 Guess it pays to be Nelly. Then again, his bank roll pales in comparison to Pacman Jones'. Jones reportedly "Walked into the club with about $100,000 in cash inside a Louis Vuitton backpack. He exchanged $40,000 of that with a club manager for singles."
Surprised? Don't be. This isn't the first time our boy helped an NFL player get his drizzle on.