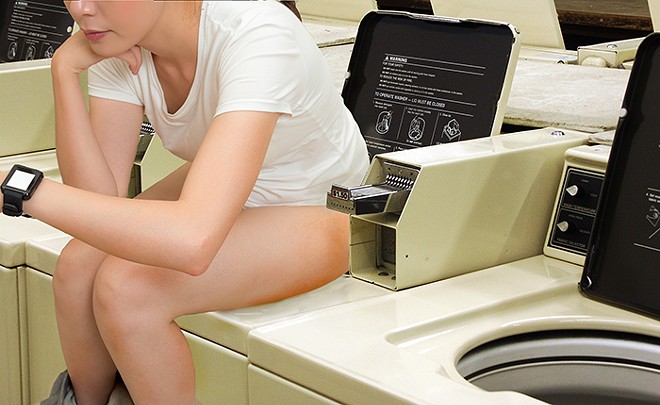 Photo illustration by Kelly Glueck
Artist rendering of the Washing Machine Pooper in action.
Brian Pillar was not prepared for the horrors he found waiting for him in the washing machine.

A freshman studying design at Southern Illinois University in Carbondale, Pillar was preparing to wash his clothing in the laundry room last week at Abbott Hall, one of the residence buildings on campus. That's when he made a shocking discovery.

“I went down into the laundry room to wash my clothes," Pillar tells the Daily Egyptian, the school's student-run newspaper. "And I opened one of the washers and noticed that it smelled like someone had taken a dump in there. I wondered if maybe someone had had an accident in their clothes or something.”

Pillar is not alone in his harrowing experience. Erica Miller, a sophomore studying mortuary science, has witnessed the same chilling scene — finding poop mixed in with his clothes on no less than three separate occasions.

“I get my clothes out of the washer and there’s the smell,” he says. “That is what you encounter first, and then you find it. You see the actual feces... and you’re like ‘No, thank you.’”

One load of poop in the washing machine? Well, that could easily be passed off as an anomaly, a fluke. Maybe someone had an emergency. Hey, we've all been there.

But repeated dumps? That's a whole different matter — one that has students fearing there is a serial pooper terrorizing the campus grounds.

Sami Pierce, a sophomore studying interior design, had her own run-in with the pooper's handiwork in September, when she found dookie in the machine near where her socks were caught.

“This has been a problem for awhile,” she tells the school paper. “Where do you report it to, though? That’s not something you expect when you’re doing laundry.”

Residents of the building say there have been eight total confirmed reports of washing-machine doo-doo in the building's laundry room. Two of them took place in the 2016-17 academic year.

Khiyah Ransom, a sophomore studying industrial design, is a resident of Abbot Hall. The string of excrement assaults has so shaken her that she now lives in fear of doing her laundry.

“Now I’m, like, terrified to wash in Abbott,” she says. “I was really upset about it, but I was like — I’m just wondering who’s doing this pooping.”

She's right to be afraid. After all, pooping in a washing machine, as we all know, is no laughing matter. In fact, the washing machine lands at No. 7 on the list of most unacceptable household appliances to drop a dook in. (Residents should be thankful, at least, that the dryers were never brought into play here.)

Here's a refresher on that list, since many U.S. citizens probably haven't thought about it since it was taught to them in grade school:

10. Salad Spinner: Unless your diet is particularly fiber-heavy, that shit's just going for a ride.
9. Electric Can Opener: More of an art installation than a nuisance.
8. Bread Machine: Would be higher, but when's the last time anybody used this thing?
7. The Washer: For the novice only.
6. Microwave: Ambitious, but no one notices unless you keep your microwave clean.
5. George Forman Grill: It's a hell of a way to wake up your roommates.
4. The Oven: It's like napalm for your sinuses.
3. Toaster: What is this on my toast, Nutella?
2. A Lidless Blender: A.K.A., "The German Kaleidoscope."
1. The Dryer: Burn the house. Never speak of it to anyone.

For their part, school administrators are working around the clock to get to the bottom of the delinquent defecations. Jon Schaffer, director of housing staff at SIUC, says in a statement that the incidents are being investigated.

"Housing staff received one report of an incident in September; it is being investigated by the Department of Public Safety," he writes. "Following the report, staff members initiated conversations with students about responsible group living and respect for each other’s property. We always encourage residents to stay with their laundry in order to prevent theft or other issues."

As for the students subjected to these horrors, they hope that the prolific poopetrator is stopped soon so that they can return to their normal lives.

She's right, of course. Nothing funny about it at all.