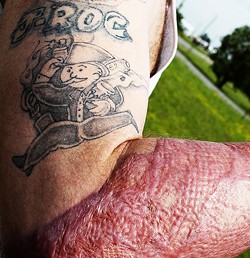 Shake and bake burn victim.
Bootheel Drug Task Force investigators were in Steele, MO, earlier this week watching a farm house suspected of being an illegal drug manufacturing operation when a vehicle left. The agents pursued the vehicle, which stopped in the middle of the road and then disgorged its driver, who took off on foot. (Because that's how you escape cops in cars?)

The agents quickly tackled the suspect, who then dropped a plastic one-liter bottle from his jacket.

Do you see where this is going? Rural Missouri, suspected drug house, bozo running crazily for the trees?

The bottle was in fact a "fully active, boiling shake-and-bake methamphetamine lab," according to the report in the Kennett Daily Dunklin Democrat. Fortunately for the arresting officers the bottle did not explode upon impact, which is what often happens with the shake-and-bake method. The chemicals involved in meth production include anhydrous ammonia and starter fluid, which when ignited, eat right through a human body even after the flames are extinguished. The suspect (not identified) is in police custody while formal charges are being prepared.

But the incident does serve to remind us that the police now have a new question to ask before they pat down a suspect in custody. In addition to asking if someone is carrying any weapons or needles, they should probably ask "Are you making meth in your pockets?"