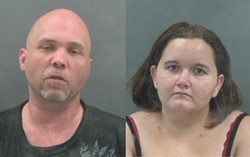 Shawn Ingram and Dana Kintz
A domestic disturbance call from a south St. Louis home this past spring turned into a bit of a dog and, uh, pony show.

According to probable cause statements, Dana Kintz, 28, called police to complain that her boyfriend, Shawn Ingram, 37, had hit her. Prosecutors ultimately didn't pursue domestic assault charges, but they did end up charging both parties with unlawful sex with an animal -- their dog.

Maybe don't read the next bit if you're eating right now.

And then Kintz told the officers that Ingram made her perform sexual activities with a dog, according to the probable cause statement. Ingram had photos of the incident, which the police found. These photos showed "photos of the defendant with a dog's penis in her mouth."

Surprisingly, unlawful sex with an animal is only a misdemeanor -- I sometimes forget Missouri is still overwhelmingly an agricultural state. At any rate, both Ingram and Kintz are now charged with this misdemeanor offense, despite Kintz's assertion that she was an unwilling participant.

The dog has since run away, according to Kintz.