One of Steve Stenger's top allies pleaded guilty today to a felony, just hours after a major campaign donor to the former St. Louis County executive was arraigned in an ongoing pay-to-play public corruption case.

Sheila Sweeney, 61, admitted in federal court that she not only knew her boss was trading favors for bribes, but that she also helped make it happen and covered his tracks.

Starting in 2014, Stenger was groping for a way to steer a county employee benefits contract to John Rallo, the owner of an insurance company who had helped underwrite his campaigns for county executive.

The only problem was that he couldn't figure out how to do it. A department head and the commission that had oversight of the coveted insurance contract twice blocked Stenger's attempt to give the business to Rallo's company Cardinal Insurance.

In text messages and recorded conversations, Stenger clumsily tried and failed for more than two years to hook up Rallo. That changed after Sweeney got involved. 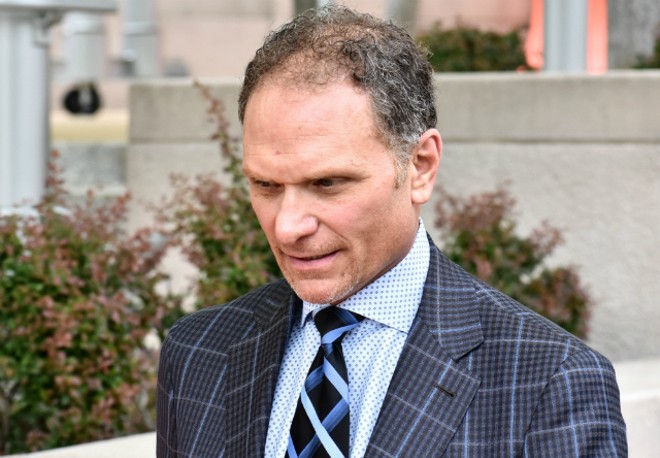 DOYLE MURPHY
John Rallo was arraigned on three felonies and pleaded not guilty.

At Stenger's direction, she pushed a $100,000 consulting contract through the Port Authority for Rallo, ostensibly to help boost the county's image following protests in Ferguson.

It was a weird plan. Rallo is friends with Montel Williams and was supposed to enlist the television personality in the marketing campaign, prosecutors say. Rallo had run bars and nightclubs before going into the insurance business, but he had no marketing experience and created a new company, Cardinal Creative Consulting, to apply for the contract.

The deal was for six months, with the idea it would be renewed for another $100,000. Sweeney padded it with another $30,000 for another Stenger booster without the Port Authority board's approval.

Rallo was arraigned this morning on three felony counts of theft of honest services bribery and pleaded not guilty. They're the same charges that Stenger pleaded guilty to last week.

Federal prosecutors say Sweeney coached Rallo through the process of applying for the consulting contract and, once he got it, advised him how to clean up the progress reports he was required to submit so that it would be less obvious that he was doing nothing under the sham contract.

"Can you send me a different contract report for the last period?" Sweeney asked in one text message recovered by investigators. "The last two read exactly the same and that's not good."

In court today, Sweeney pleaded guilty to misprision of a felony — a charge that means she knew about a crime, didn't report it to law enforcement and took steps to cover it up.

The maximum sentence is three years in prison with a $250,000 fine.

One of Sweeney's four attorneys, Justin Gelfand, emphasized after the hearing that his client had not pleaded guilty to fraud. He added that she was "profoundly remorseful" and was taking full responsibility for her crime.

Rallo, who now lives in Salt Lake City, is apparently going to fight the charges against him. He appeared briefly this morning and entered a plea of not guilty through his attorney, John Rogers. They left court, trailed by reporters, without answering any questions.

In an indictment, prosecutors include numerous text messages between Rallo and Stenger, and Rallo and Sweeney, as the businessman repeatedly checked in on various deals.

Of the five schemes laid out in Stenger's guilty plea, four involve Rallo. In addition to the marketing contract, Sweeney helped him make deals for two pieces of land Rallo planned to develop through yet another of his companies, Wellston Holdings.

In December 2017, Sweeney instructed Rallo to clean up the paper trail in the consulting contract, telling him to have his name taken off filings with the Secretary of State.

St. Louis Post-Dispatch reporters were growing suspicious of the connection between Rallo and the county executive, and Sweeney wanted to protect Stenger.

Rallo promised to take care of it.

Sweeney is due to be sentenced on August 16. Stenger is set for August 9. No new court date has been scheduled for Rallo.