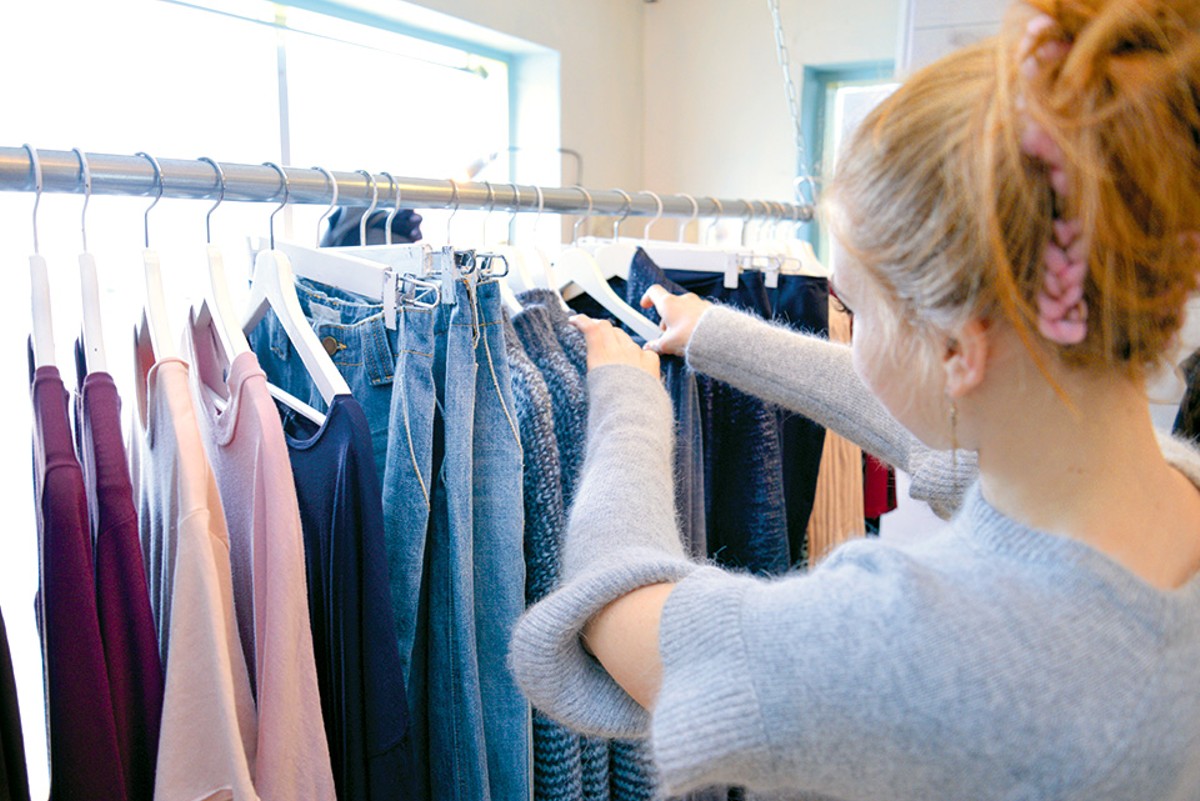 Maya Harlan attends to the racks at LAUNCH, a two-year-old boutique on the Hill. TOM HELLAUER

TOM HELLAUER
Lia Glynias knows the clothes she sells at LAUNCH are best experienced in the flesh.

In the brave new cyber world in which we live, it would be madness to open anything as quaint as a clothing boutique.

Don't tell Lia Glynias that, nor her stylish cadre of loyal customers. Her boutique, LAUNCH Clothing & Accessories (2008 Marconi Avenue, 314-325-6785), has become a Hill mainstay in the two years it's been open. She has a web presence, sure — she's not nuts. But the best stuff often doesn't even make it online, and the IRL experience is far and above the digital one.

Glynias traces her roots — St. Louis roots and fashion roots — to her great-grandparents, Stephanos and Evangelia Constantinides. The pair emigrated from Greece in 1919 and set up a dry-cleaning business in St. Louis. Glynias' grandmother Olympia worked there as a seamstress until it closed in 2006.

As a teenager attending Clayton High School, Glynias worked at the Gap, and the company subsequently allowed her to transfer to New York. There, she amassed experience in retail, importing and private-label production. After traveling the world and immersing herself in the business of fashion, though, the pull of home was strong.

"It was very important to me to be in St. Louis," says Glynias.

She returned to St. Louis in 2014, and struck up a relationship with Nina Ganci, the creative force behind Skif International, the knitwear boutique and workspace on Marconi Avenue in the Hill neighborhood. In June 2016, LAUNCH Clothing & Accessories was born.

The shop is within the Skif showroom, with the register and about half the merchandise in a nook off a side entrance; the rest of the clothing is displayed close by in the larger showroom. Skif's whimsical pieces and LAUNCH's sleek looks hang near each other, which makes for intriguing interplay.

Glynias took the business online in 2017, but the ease and convenience of online shopping can't really compete with the synergy and personal touch that LAUNCH offers. Visiting her shop on a recent sunny Saturday morning proves to be a full-on sensory experience. Skif isn't just a store, but the actual design-and-manufacturing site for Ganci's knitwear — Glynias calls it "City Museum for clothes" — and you can see manufacturing in process. The site also boasts the unmistakable scent of freshly made soap, which wafts from Herbaria next door. Artists and artisans come and go, chatting about the previous night's artist talk at the Saint Louis Art Museum. Breakfast goodies from La Patisserie Chouquette are shared, and a big brindle dog begs more or less politely.

Glynias encourages a visitor to move from admiring to trying on a full-length gray coat done half in a boucle-effect fabric and half in a smooth one, from Greek line Ozai N Ku. On the hanger it's lovely — on the body, it's breathtaking.

"In the generation of the internet, how could you be so crazy to open up a brick-and-mortar?" Glynias jokes. The sensory thrill of experiencing the coat's cut and luxurious texture in real life more than answers her question.

Online sales only account for around 20 percent of her business. When Glynias opened, she fully intended to compete for the in-person dollar, not the online one.

"I never want to be someone who's shipping 500 boxes out every day," she says.
—Melissa Meinzer