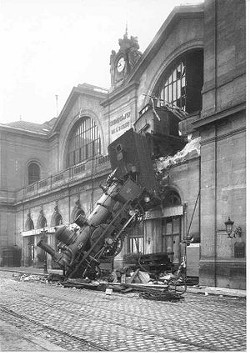 Would MetroLink expansion be worth the cost, or just another, well, trainwreck?
The conservative think tank Show-Me Institute dispatched an op-ed column to local media on Friday blasting Metro's plans to expand light-rail in the region. Coincidentally (or not), Friday was also the day Metro presented its "30 Year Plan" to local transportation officials that calls for (you guessed it!) two new light-rail extensions to MetroLink over the next few decades.

I know, I know. It's hardly surprising that a think tank founded by financier Rex Sinquefield (a man whose m.o. is to avoid taxes) would call into question a public transit system subsidized by, well, taxes. But, in this case, the Show-Me Institute does make a few interesting points.

With ridership levels roughly correlating with population density, we can expect to see far fewer passengers on the new lines than those serving the central city. This will force down the percentage of Metro's operating expenses paid through fares, which already stands at a dismally low 25 percent, according to the auditor's report, and will increase the system's dependence on tax dollars.

Payne also notes that with the removal of streetcars from St. Louis in the 1950s and '60s, the current infrastructure makes it difficult and cost prohibitive to add light-rail. Instead, argues Payne, Metro should make use of the infrastructure that already exists -- roads and highways -- and set up more express bus routes.

We would obtain a much greater benefit at a significantly lower cost if we instead focused our public transportation dollars on new, higher-speed bus lines, which are cheaper and far more adaptable than light rail. Although the expansion of light rail into every reach of suburbia may promise an end to traffic congestion and the revitalization of the city, it will ultimately entail spending huge amounts of money in order to transport far fewer additional passengers than are served by the lines already in existence.

In April Metro will ask St. Louis County voters to approve a half-cent sales tax part of which would fund further MetroLink expansion.

Continue to the next page to read all of Payne's op-ed piece and see one example of a high-speed bus.