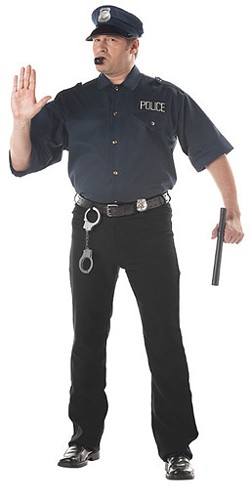 PoliceCostumes.com
If your traffic officer is dressed like this, you may be stopped in the name of love.

There are ways of getting out of a traffic ticket. There's crying, of course, and then there are ... sexy ways. While that is definitely never OK, folks who consider this transaction worthwhile should take note -- there is a fake cop on the loose, preying on that very predilection.

According to the REAL Shrewsbury police, a woman was just driving away from a legit traffic stop for a broken headlight when she again saw flashing red and blue lights behind her. She pulled over a second time and got out of the car to show the officer that she'd just gotten a ticket.

That's when things got weird.

The "officer" also got out of his car to hear the woman's plea. His white Chevy Impala had no markings on the outside or lights on top of it. And though he wore a utility belt and gun on his hip, his uniform did not have any identifying patches on it.

While the woman was talking, the mystery cop got in close and gave her a peck on the cheek. Then he went in for some full-blown mouth-to-mouth, but the woman refused. The man shrugged it off.

"He said, 'Well, you'll be paying enough for this citation. You can leave,'" explains Shrewsbury Lt. Brian Catlett.

Understandably confused, the woman and her boyfriend reported the incident the next day. After talking to real police, they discovered that no one in the department matched the description.

"We're not sure who this person is," says Catlett. "We definitely know it's not a Shrewsbury officer."

Now they're putting a call out to the public to see if anyone else has fallen victim to Officer Very Friendly. He's a white male with blond hair spiked in the front, 5-foot-7-inches, about 180 pounds, and between the ages of 22 and 30. The Impala was a late '90s or early 2000's model with circular red tail lights. He could be an officer from a neighboring jurisdiction or some kind of security worker. Anyone with information should call 314-647-5656.

Catlett says they've contacted other agencies to see if the errant officer might be one of theirs, and says he can't speculate if the fake officer was tailing the real cop looking for victims.

In the meantime, he reminds people to ask to see a badge if they're pulled over by a bogus-looking officer. (God help you if it turns out to be a real officer.)