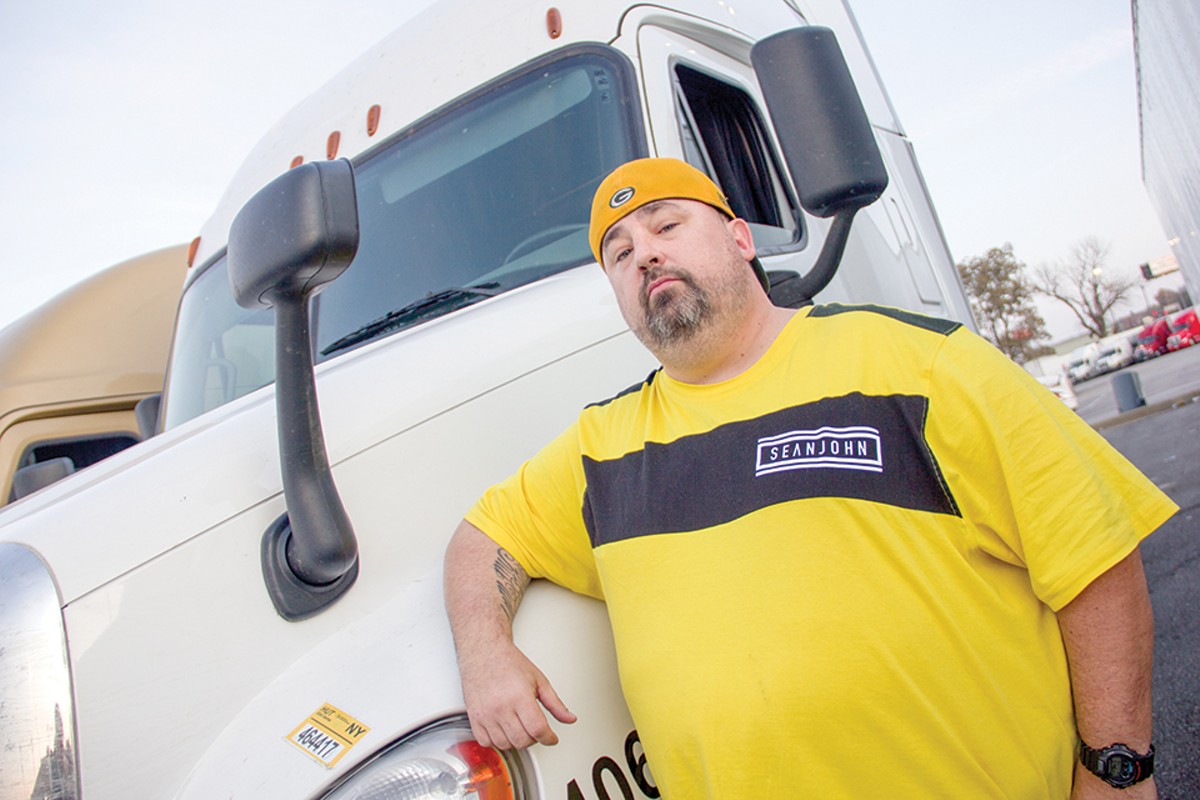 Anthony Greene knows when he isn't wanted. Seated behind the wheel of a hulking tractor-trailer on a recent Sunday afternoon, the 45-year-old trucker looms above an expanse of parking lot behind a Love's Travel Stop near downtown St. Louis. Back in the summer of 2018, it was in gas stations like just like this where he started showing up to livestream "exposures" of sexual predators.

Greene and his group, Truckers Against Predators, or TAP, are among a new generation of predator hunters in the United States. And starting last year, it was his mission of justice — not just a large Facebook following — that won him sustained media attention. It also attracted no small infamy from local police departments.

"In St. Louis, unfortunately, we won't even call the police now. They treat us like we're criminals," Greene complains. "In Yuma (Arizona), they treated us like we were frigging rock stars."

In November 2018, the gleaming white cab of Greene's truck hurtled across the country on its way to the West Coast, passing through Texas, New Mexico and, most notably, near Yuma. It was there that Greene sprung a sting operation on Matthew Sanchez.

Sanchez thought he was meeting a thirteen-year-old girl at a Love's gas station. Instead, as captured on Greene's livestream, the 30-year-old with a patchy beard and pink T-shirt walked out of the convenience store to find the six-foot-four, 300-pound goateed trucker filming him on a smartphone.

Even on the grainy Facebook livestream, Sanchez's eyes are wide, white and terrified. Greene keeps the camera running.

"Hey, Matt," the trucker says. "You want to have a conversation with me? Who are you trying to meet up here?"

"Listen to me, man," he says. "Everything is going to a whole lot smoother for you —"

"If you're just honest," Greene rumbles. "The police are going to be involved either way."

It's the sort of scene that played out dozens of times on NBC's To Catch a Predator. Here, of course, there's no film crew, no house, no Chris Hansen. There are also, in fact, no cops on the way.

Sanchez tries to talk his way out, reaching for the oldest defense in the book. "Hey, she told me she was 21." Greene isn't having it. He tells the deflated Sanchez that he's seen every text, every photo he's ever sent TAP's decoy.

After a few more rounds of interrogation, Sanchez clams up. He gets in a cab and leaves the gas station. But then something else happens, and for Greene, something entirely unplanned for. That night, Sanchez went home, dialed 911 and turned himself in.

Sanchez's arrest marked the high point of Greene's career as a predator hunter. Today, recounting that story during an interview conducted inside the cab of his truck, Greene heaps praise on the Yuma Police Department, which announced the arrest on Facebook one day later, even crediting Truckers Against Predators by name.

Sanchez may never have communicated with an actual child, but he'd committed an actual crime.

In July 2019, Sanchez pleaded guilty to a felony charge of "Luring a minor for sexual exploitation." A judge sentenced him to five years in prison. He will have to register as a sex offender.

For Greene and TAP, it was a huge moment. It was the group's first conviction.

"We're really pumped about that, rejuvenated, and we're still getting a lot of press," Greene says. Indeed, in the past two years, coverage of TAP has appeared in virtually every local TV station and newspaper (including Riverfront Times) in both Missouri and Arizona. In October, Greene was interviewed for an episode of Inside Edition. He says he was recently flown out to shoot a soon-to-be-aired episode of Dr. Phil.

Greene is in the midst of rebuilding TAP. He paused his livestreaming ambushes earlier this year, which he blames on a bacterial infection in his leg that kept him bedridden and off the road for months. In late 2018, he had the largest Facebook following of any U.S. predator hunter group. Now he's hoping to leverage his page's popularity for a comeback.

Despite the Sanchez case and dozens of busts under his belt, Greene's work has never led to a second conviction. In Missouri, that's no accident. In the past year, police departments in St. Louis city and county have repeatedly disavowed any relationship to TAP — rebukes that followed videos in which Greene told targets that he was working alongside police partners. Greene admits now that he's been told "flat out" that any TAP case in St. Louis City is, prosecutorially speaking, dead on arrival.

Greene argues that it doesn't have to be that way, and he claims the impasse is costing the police workable cases. "If we're getting arrests and convictions in other states, then the problem is obviously not us; it's how the laws are written here," he says. As evidence, he claims he recently called a detective in Greene County, Missouri, with evidence he'd collected from a decoy.

"I told him I had three guys in his area," Greene says. "He told me, 'We don't work with vigilante groups.' They didn't even want the information."

Police, though, aren't shy about their views on Greene. Law enforcement officials in St. Louis, St. Charles and Jefferson County say they want nothing to do with his citizen's crusade, no matter how well-intentioned. St. Louis County's prosecutor refused to bring charges even after Bridgeton police arrested two of Greene's sting targets in December 2018. A man facing solicitation charges in Franklin County had his case dropped after a new prosecutor took office in January. And it wasn't just prosecutors. In July 2018, a lieutenant with the Jefferson County Sheriff's Office submitted a report describing his refusal to respond to one of Greene's sting operations.

The lieutenant concluded his report, "We did not get exposed on Facebook Live for Greene's pleasure."

However, across the country, the citizen-led predator hunter movement continues to gain traction. More than a decade after To Catch a Predator introduced America to the dramatic world of internet predators and staged ambushes, the genre has exploded across Facebook, generating viral stories and fresh media coverage with each uploaded video and arrest.

There are dozens of active groups in the United States alone, and similar predator hunters in the United Kingdom have operated aggressively, and productively — evidence provided by hunter groups was used to prosecute more than 250 suspected abusers in 2018, the BBC reported. While charges and convictions are slowly accumulating across America, police in Missouri remain overwhelmingly uninterested.

But if you cross the Mississippi, about an hour's drive into Illinois, the hunt has never been more active.