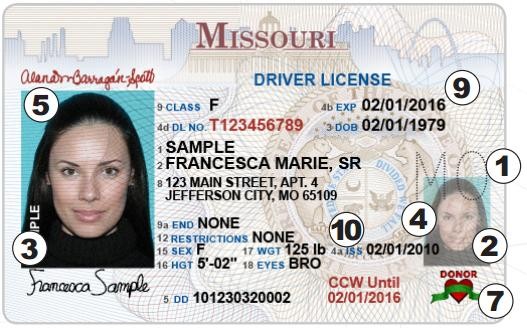 The new license includes security enhancements such as "laser perforation" that reveals a hidden image when held to certain types of light.

Getting a fake ID in Missouri is about to get a whole lot tougher. Beginning in April the state plans to switch to a new driver license intended to curtail identity theft and other kinds of fraud -- like drinking if you're under 21. Yep, that's right minors. You're totally fucked with this one. Don't believe us? Just take a look at the following image. 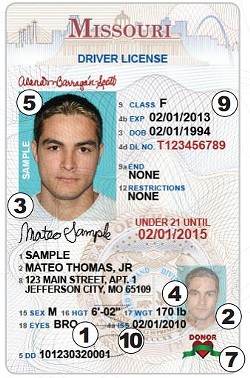 Yep, that's right. Your driver license is effin' vertical. The state may as well stamp "Minor" on your foreheads 'cause the only cocktail you're buying with this ID is a Kiddie.

But besides all the gadgetry behind the new license (like temperature sensitive ink, ghost images and bar codes), the state has one more trick up its sleeve to make this ID fraud-proof: You can no longer pick it up right on the spot at the DMV.

The state will instead mail you the ID from a centralized site within seven to ten days. Why? Because mailing the license requires a valid address for those who might be posing as someone else. The license will arrive in an unmarked envelope.

The good news is that the state says the new driver license won't cost any more than it does now -- $10 for a basic, three-year license.

Still, are we perhaps getting a bit too clever for our own good? And does anyone else recall those Missouri driver licenses from the early 1990s -- the ones you could easily alter with a colored pencil? Take it from a former license artiste, those were the days to be underage in Missouri.