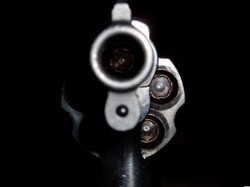 Taking hatred of the snowstorm to a whole new level?

We'll admit that one of the worst parts about snow in March is the agony of driving through this weather, and we can only imagine how horrible it would be to get in a collision. But gun violence is not the answer!

St. Louis police say that a 44-year-old woman was exiting I-70 eastbound at the Martin Luther King Bridge exit when an unknown man drove into her lane and collided with her. He apparently apologized. And then she started shooting.

Police list the location of the assault as North Third Street and the MLK Bridge and at this time say that the victim is an unknown white male.

The collision happened just before midnight last night, and after the man collided with the woman, she reportedly followed the vehicle and "blocked the victim's vehicle with her vehicle."

She exited her car, walked to the passenger's side of the man's car and told him that he had hit her car, police say, at which point he apologized -- and left.

Apparently not pleased with this interaction, the woman, whom police have not named, got back in her car and continued to pursue the vehicle that hit her. Then she opened fire on him on North First Street. He fled onto I-70, and the woman was arrested.

The shooting took place near Laclede's Landing, which has experienced a spike in violence in recent months.

Here's the full alert from police.