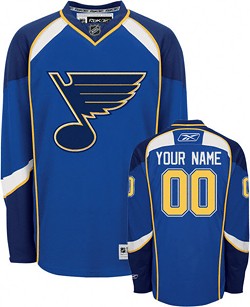 The largest investor in the St. Louis Blues, TowerBrook Capital Partners, wants to sell its ownership stake in the NHL franchise.

TowerBrook -- a New York-based, private-equity firm -- never planned on being with the Blues for the long run. The company is friendly with Blues chairman and principal owner Dave Checketts and came to his aid back in 2006 when he purchased the club from Bill and Nancy Laurie.

According to reports, TowerBrook currently owns about the two-thirds of the Blues. Forbes values the franchise at around $162 million. The Hockey News, meanwhile, notes that average attendance at Blues games has increased from 12,520 in the 2006-2007 season to 18,883 last season. However, it's believed that the team remains unprofitable.

So, who would want to purchase a majority stake in a money-losing sports franchise? The candidate would obviously need lots of $$$. He (or she) would need a certain amount of hubris and a love of professional sports.

How about awarding the franchise to whoever loses the bidding for the Rams: Shahid Khan or Stan Kroenke?

Seems like a good solution to me. And, yeah, I know what you're thinking: Kroenke already owns an NHL franchise (Colorado Avalanche) and league rules prohibit one person from owning two teams.

Well, here's a solution for that -- right out of Kroenke's playbook. Put the Blues in his wife's name, Ann Walton Kroenke.