Some Happy VD Reading, Courtesy of Our Friends at The Pitch 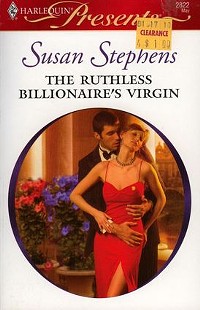 image source
The Plog, the news blog of Riverfront Times' sister paper in Kansas City, The Pitch, runs a delightful weekly feature called Studies in Crap in which Crap Archivist Alan Scherstuhl "brings you the finest in forgotten and bewildering crap culled from basements, thrift stores, estate sales and flea markets. I do this for one reason: Knowledge is power."

This week the Crap Archivist ventures bravely into KC's used bookstores in quest of the much-maligned Harlequin Romance, in particular the specialty series "International Billionaires", "MEN: Made in America" and "Nights of Passion" and gleefully uncovers such undiscovered gems as Naughty Nights in the Millionaire's Mansion.

The quest has a happy ending (ahem!) as Scherstuhl uncovers deathless prose like ""For the next few minutes the sounds of nature at its most contented were echoed by the groans of desire from Tessa and Danny as they moved toward fulfillment" plus a sex scene that actually starts on page 69!

For the slash fiction fans among us (and we know there are plenty, judging from the comments on a feature about a certain yaoi convention), Scherstuhl throughtfully provides an excerpt from a story about George Harrison and Paul McCartney and the genesis of "Fixing a Hole". And, of course, there's this, proving that cheesy romance extends across all genders and platforms:

Crap and VD...what a splendid combination!