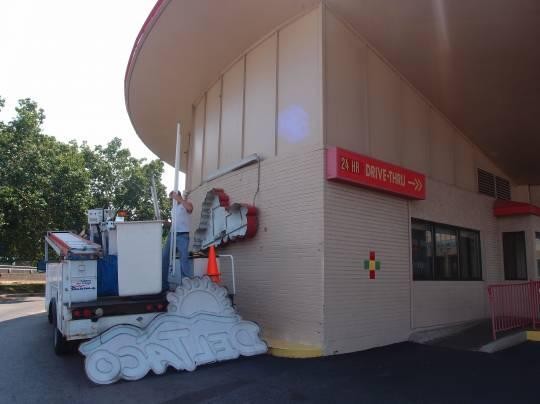 Albert Samaha
Another vacant building in St. Louis. At least this one looks cool.

The lease wasn't up until midnight, but the Del Taco on South Grand was pretty much cleared out by 9 p.m. yesterday. It was naked inside. No pictures and prices above the counter. No cardboard cutouts promoting 89-cent chicken burritos. The doors were locked. Even the drive-through menus were gone.

This confused the people inside two cars pulling up to the speaker box, under a sign that read "24 HOUR DRIVE-THRU ->>". The drivers sat there for a moment, assessing the situation. Then two employees, a young woman and a young man, walked out the back door of the restaurant carrying garbage bags. The woman looked toward one of the cars.

"Closed? Since when?" the man in the car asked, incredulous.

"Tonight. Closed for good," she responded, before tossing the black plastic bags into a dumpster.

The cars drove out the other side of the drive-through and pulled back onto the street.

The building's become something of a cause celebre among the city's young and historically inclined. More than 12,000 have "liked" a Facebook group to save it. A week from today the Board of Aldermen will vote on whether developer Rick Yackey will get a tax abatement to redevelop the property, which may or may not lead to the demolition of The Saucer on South Grand.

But in the meantime, it's worth remembering that the drama about the building obscures an all-too-common story: Another business in the heart of the rust belt closed, another casualty to the worst recession in 80 years. That young woman by the dumpster has to find another job. So do all the other employees at this Del Taco and the one on McCausland Avenue, which also closed last night.

The loss didn't go unnoticed. The South Grand Del Taco's parking lot was full around 9:30 last night, and a group of teenagers stood outside the famous flying saucer overhang, disappointed that they didn't get one last chance to toast burritos in what's become the most talked-about building in Missouri.

(For what it's worth, this morning, you could purchase two of the final fish tacos from the place off Craigslist for $15. Out of privation comes entrepreneurship -- or something.)

Around 10:30 a.m. the next day, men with cranes took down the bright red and yellow and green signs. St. Louis had no choice but to take its appetite elsewhere.

A few minutes after the signs were removed, a man in a green pick-up truck pulled into the lot.

"Yeah it's closed," replied one of the men in the cranes.

A woman in a wide brimmed hat and flowery dress was also in the parking lot. She overheard the news.

"That is sad," she said. "Another piece of St. Louis trashed."

Albert Samaha
Men from D&D Lighting took down the signs and the lights.