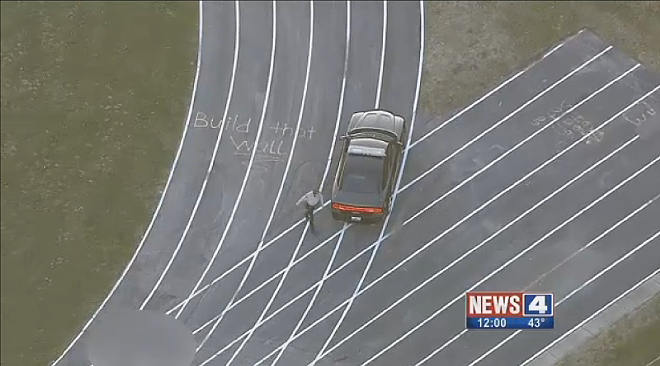 Screenshot from video below
Last night, vandals targeted a St. Charles middle school with sexist and political messages, as well as racial slurs, according to KMOV.

Police discovered the graffiti at Barnwell Middle School just before 7 a.m. Messages were painted on the school's track, the school building itself and on a portable building on the grounds.

In a video shot by KMOV, "Build that wall" can be seen spraypainted on the track, as well as a drawing of a middle finger, a pentagram and the words "666 Hail Satan." KMOV is reporting that racial epithets were included as well.

Crews are already working to clean the graffiti, and police are working with members of the community and school officials to try to find the parties responsible for the vandalism.

The vandalism comes as the country is seeing a spike in hate crimes and racist graffiti since the election of Donald Trump.

Watch KMOV's video on the incident below.