St. Louis BarCycle Fights for the Right to Drink, Pedal, and Party in Soulard [UPDATE] 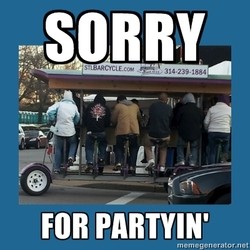 A BarCycle fan generated these in preparation for Thursday's hearing.
Update: The vexing results of this morning's hearing.
The St. Louis BarCycle is in a fight for its very existence, and owner Dan Lloyd sounds optimistic but worried.

"This is running in at least 25 cities around the United States," he says. "I can't name a single city that's shut it down or not allowed it."

Lloyd hit the streets of Soulard about a year ago with his "BarCycle" -- a ridiculous-looking 16-seat mobile bar pedaled by beer-swilling patrons and steered by a sober guide/driver.

Known also as the "Pedal Pub" or "BierBike," the concept first appeared in Europe in the '90s. In the last five years or so, enterprising Americans have brought the idea to cities like Portland, Minneapolis, and Santa Monica. Some of the vehicles actually have beer on tap and function as a (drunk) sightseeing tour, but St. Louis BarCycle is more of a pub crawl through the Soulard business district. Passengers are welcome to bring their own drinks for the ride between bars and can pick their route from a list of watering holes in the area.

Lloyd was forced to hit the brakes a month and a half ago, however, after some residents complained about the tour's rowdy participants, their late hours, and traffic obstruction. That lead Soulard Alderwoman Phyllis Young to discover that Lloyd was operating without proper permits from the Metropolitan Taxicab Commission and saw to it that the BarCycle ceased operating. 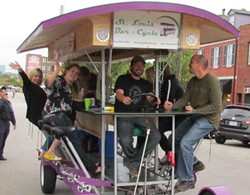 BarCycle Facebook
Lloyd says he believed he only needed to register with the state and hold insurance. It's a mistake he is paying for.

"I've had to cancel six consecutive weeks of sold-out tours," he says. "That had to ruin a lot of 30th birthday parties and bachelorette parties."

Young and Lloyd met together earlier this week to talk out their differences. Lloyd promised to pack it in at 10 p.m. on weekdays and 10:30 p.m. on weekends, cease driving down alleyways, turn down the onboard stereo, and avoid 9th street during Cardinals games. Nevertheless, Young says she is still dubious about the concept.

"I'm concerned about whether it fits in the neighborhood at all. I think we already are congested," she says. "Residents living in that bar area, they are complaining they have a lot of noise from the bars without the noise from a bar-cycle going past."

On Thursday at 9 a.m., Lloyd will make his plea to be issued a taxi permit at a public hearing in front of the commission. He's hoping fans of the BarCycle will turn up to support him; Young says she will be unable to attend but knows that some residents will at the very least be writing letters in opposition.

Taxicab Commission Executive Director Ron Klein says the members will weigh both sides and make a decision by next week at the latest.

Lloyd says if he's forced from Soulard he may pack up his business and move out of St. Louis. The BarCycle contraption was an expensive piece of equipment -- Lloyd says his cost $40,000, to say nothing of his insurance and rent. But he remains hopeful.

"I'm just going to be cooperative and hopefully make a case that I deserve this license and that I'll operate safely," he says. "I'll be back on the road by this weekend, I hope."

Update: In a move that likely pleased no one, the commission once again postponed its ruling on the fate of the BarCycle. The commission cancelled its June meeting the first time the issue came on the agenda.

Citing a need for further research on open container laws and more dialogue with the excise department, the commission will not take up Lloyd's license application until its next meeting in late August. That means the BarCycle will be shut down for the majority of the summer.

Mayor Slay weighed in via Twitter seemingly in response to the #SaveBarCycle hashtag some fans started:

The taxi-bar operating in Soulard is fine, but only if it is licensed, legal, safe, and welcome by the neighborhood. #fgs

It's not entirely clear how city laws will impact the decision. City spokesperson Kara Bowlin says in an email, "The barcycle wouldn't need a liquor license because they're not actually selling/serving beer. They won't have to go through the excise commission at all."
Lloyd is understandably frustrated and says he plans to hire an attorney.
"I'm disappointed that they're kind of stifling my small business. I'm trying to bring a fun activity to St. Louis," he said Thursday afternoon. "I'm on my way to St. Charles to discuss moving the operation out of St. Louis city."
Lloyd estimates that if he were allowed to operate, he'd bring about 4,000 to 6,000 additional patrons to Soulard bars each year. Although he's considering moving, he says he'd prefer to remain in Soulard.
(H/T to ILoveSoulard.com for keeping us abreast of the commission (in)action.)

For an idea of what the fun (and the annoyance) is all about, check out this satisfied customer's video: