Yesterday Nestle Purina Petcare said it was an "error" that advertisements for its Cat Chow brand pet food that ran on Beck's show last week and would not be repeated. The same goes for any of the dozens and dozens of Nestle products. 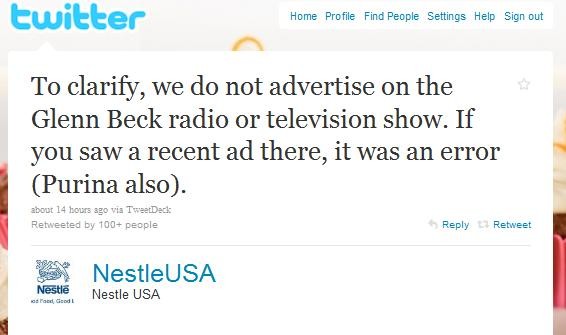 The site describes itself as "a nonpartisan effort focused on holding Glenn Beck accountable for preying on racial anxieties, employing vitriolic rhetoric, propagating sexism and disseminating willful distortions" and to "to urge sponsors to stop supporting Glenn Beck's brand of hate with advertising dollars."

To date stopbeck.com has helped convince some 200 advertisers to pull their commercials from Beck's TV and radio shows.