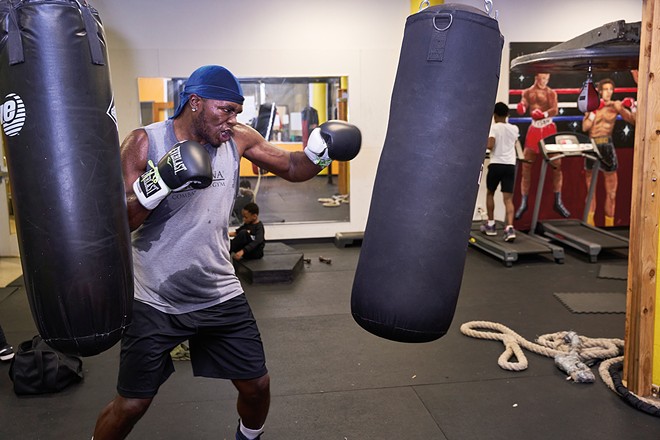 Theo Welling
Stephan Shaw has a 17-0 record, with 13 knockouts, and is close to a chance at the heavyweight title, but he’s made little money and little fame outside boxing.

Stephan Shaw, the fifth-best heavyweight boxer in the country, stands in the ring with someone who just started boxing.

It's a weekday evening, and Shaw is in a converted garage in Florissant, Missouri, that has been transformed into a boxing facility called St. Louis Boxing Academy. Heavy bags hang from the ceiling, and a makeshift ring sits in the middle of the concrete floor. Before the fight started, a half dozen people of all different ages were hitting heavy bags, but now they crowd around to see what will happen when one of the best fighters in the country takes the ring.

That's when Hosana Mulambu, the beginner, stumbles toward Shaw, his feet stuttering and chopping forward. Mulambu is around 6-foot-2 with bulging muscles, and has been training for months. But his flurry of left-hand jabs seem more like taps against Shaw's shoulder. Shaw absorbs them, barely even acknowledges them. Shaw's wife leans over the rope, videotaping, yelling for him to jab and hit the body, reminding him that he's the greatest.

For 10 or 20 seconds, Shaw doesn't throw a punch. His feet are planted. He holds his hands in front of his sleeveless 2Pac tank top, showing off his chiseled 6-foot-4 frame. He's just waiting, watching, thinking, taking a few punches — then pow. A blinking left jab right in Mulambu's forehead. "Oof," someone says on the sideline. Mulambu's head bounces backward. The makeshift ring shakes. The punch is faster than it sounds, and the pssss noise lingers in the air.

"He's like the most dangerous person on this planet!" Shaw's father proclaims from the sideline.

When the round comes to an end, Shaw gives Mulambu, who's still dizzy from the single jab, a hug. It seems like a hug reserved for the end of a tortuous fight. Shaw barely broke a sweat and threw just a few quick jabs. But he seems to be saying thank you. His father offers him water, but Shaw just keeps bouncing up and down, counting down the seconds until the second round begins. 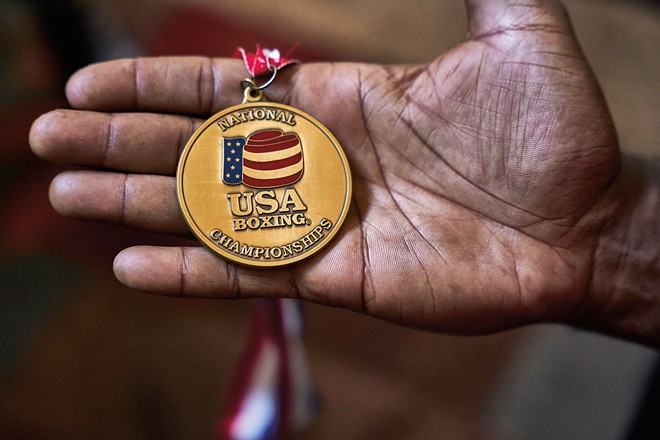 Theo Welling
In 2013, Stephan Shaw was the runner-up in the National PAL Championships.

Shaw is the 29th-best heavyweight boxer in the world, the fifth-best in the U.S., according to BoxRec. He's 17-0, with 13 knockouts. In his last fight, televised on ESPN, Shaw, or "Big Shot," as he's called, knocked down his opponent three times in the first round. He's just a few fights away from a chance at the heavyweight title and millions of dollars.

But here he is, in a garage in Florissant at 7 p.m., fighting against Mulambu, a 31-year-old who has never competed in an amateur contest and started fighting one year ago. The idea is unfathomable, as if LeBron James went one-on-one with a guy in a men's league.

When Shaw leaves the ring 30 minutes later, though, he sounds thrilled. He's happy just to have fought against a warm body.

"Man, I needed these eight rounds," he says. "I haven't done that in a minute."

Shaw pulls aside the boxers in the gym. He remembers each of their names. He looks them in the eye and thanks them for helping him. "Keep getting better," he says. "Whenever you need me, I got you." He takes a photo with all of them in the ring and holds up the number one.

After the photos, he lingers in the ring — and there, it comes out. It comes pouring out. The frustration, the sadness that is always simmering beneath the surface.

His voice, once light and easygoing, becomes sharp and agitated. For 10 straight minutes, it fills the gym, rising with each word. He grandstands to anyone who will listen, which on this weekday evening consists of only a few people — Mulambu, his dad, the gym owner, a bystander and a reporter.

He steamrolls through topics. How a boxer didn't follow him back on Instagram. How he's getting his championship belt the "old-school way." How he's undefeated. How his next confirmed fight isn't for seven months.

"Why the fuck are they keeping me out the ring for seven months?" he asks the onlookers. "Why is seven months of inactivity even a thought after my first round of knockouts? Ain't no way! Put that motherfucker in the ring for the next three months! You know what I'm saying? 'He just knocked the shit out of him in the first round; he needs some more work!'"

Shaw tells the onlookers that he loves boxing. He's one of the best boxers in the world, after all, good enough to have an undefeated record and spar with Deontay Wilder, the former heavyweight champion. He loves being in the gym, pounding cracked bags and dancing around the ring, with his entire family surrounding him. He loves the showmanship, the history and the science of the sport.

But it's not so clear that boxing loves him back. He's made little money and has little fame outside of boxing. He could lose a fight and watch his world-championship aspirations disappear. He goes through long stretches without being in the ring. He has to practice against beginners in garages in Florissant.

What do you do when you're one of the best in the world at something — and few people are paying attention? Stephan Shaw keeps boxing.