St. Louis Can't Help Itself When it Comes to Soccer Stadium Financing 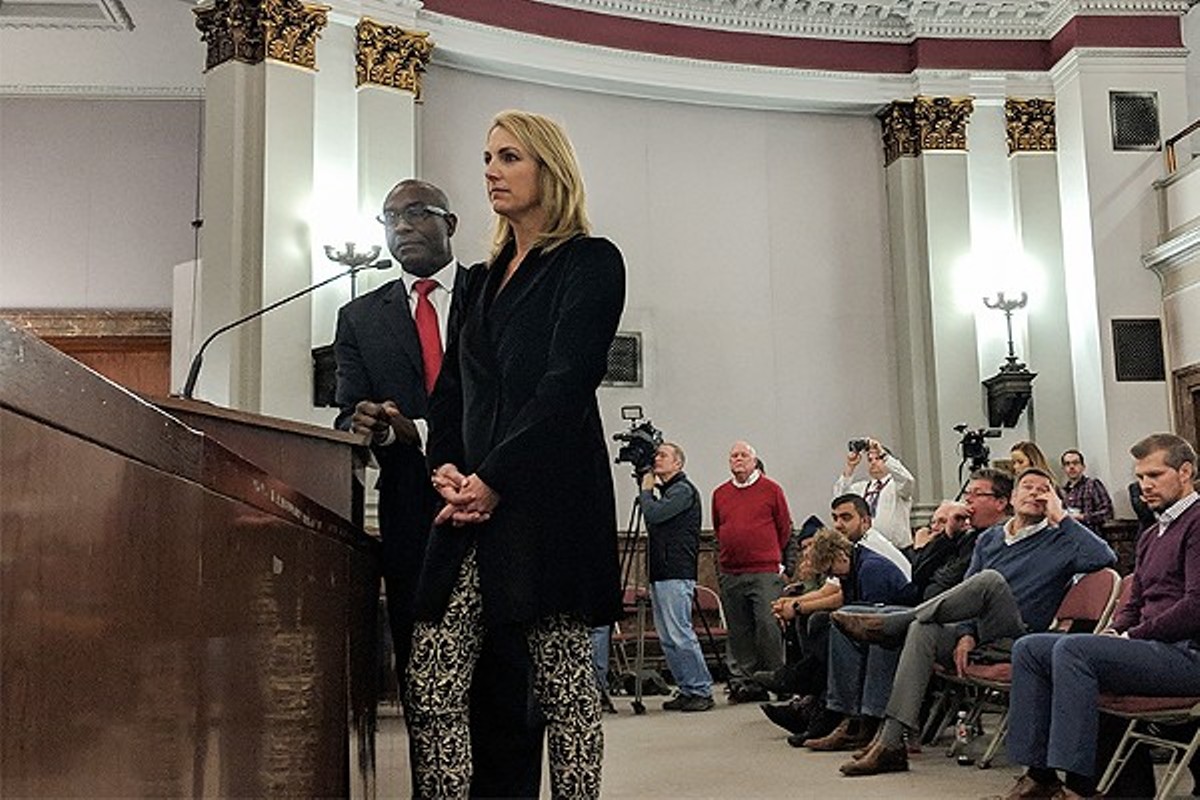 When will we ever learn?

I pose this question in response to the jarring news last week that Missouri will be providing at least $30 million in state tax credits to support the new Major League Soccer stadium complex northwest of Union Station, without objection. Previously, most of us admired the stadium project as a rare example of civic leaders stepping up almost entirely with their own money to do a wonderful thing for our town.

Let's stipulate a few points, and not just because they're obligatory. First, getting an MLS franchise is a great thing for St. Louis. It's a needed morale boost, it brings the city new commerce and it's a smart approach to stadium development they like to call "MLS urbanism." That means the new facility won't be on an island: It will connect with and enhance the surrounding area and, along with the exciting new St. Louis Aquarium at Union Station, may be transformative for the city.

Also, the people who are making it possible deserve all the acclaim they're getting. The Taylor family (including Enterprise Holdings Foundation President Carolyn Kindle Betz), World Wide Technologies CEO Jim Kavanaugh and others are rightfully regarded as local heroes, and not just by soccer fans.

This is a fine project funded by fine people. But these are very well-heeled fine people. At the time patriarch Jack Taylor died in 2016, his family fortune was estimated at $5.8 billion by Forbes. Kavanaugh himself made the most recent Forbes billionaire list, coming in at a modest $1.9 billion net worth.

So, before Missouri provides $30 million in taxpayer funding — through the indirect channel of foregone revenues via tax credits — we ought to consider four simple economic principles regarding the owners of our new MLS stadium:

1. They don't need the taxpayers' money to succeed with their investment.

2. The taxpayers' money is not necessary for their investment to succeed.

3. Their investment does not require the use of taxpayers' money to succeed.

The billionaires who are investing in the MLS franchise are not needy. The same is not so true, collectively, for the citizens of Missouri, whose state government ranks at or near the bottom nationally in funding for education, health services, corrections, highways and many more essential services.

And let's be clear, when the state foregoes $30 million in revenue via tax credits — whether they're used directly by the recipients or sold to others — that's lost money for an underfunded government. The theory behind such credits is that the loss is offset by the new revenues of the project involved.

The problem with that logic is simple in this case: The local MLS ownership group would be generating the very same revenues without the tax-credit subsidies. Why? Because this a very sound business investment, on its own merits, regardless of whatever millions the politicians want to throw at it. And it's pocket change to the investors.

I covered that part of the story in this space on May 1. To summarize, the true value of an MLS franchise is tied heavily to the league's unique approach to sharing marketing and merchandising rights throughout North America, not to the income from hosting seventeen home games per year. That's why a fellow about to buy the league's 30th franchise, in Charlotte, is willing to fork over a reported $325 million for the privilege.

Is this a can't-miss business proposition? Of course not. The future of the MLS is still an unknown. That's why we refer to "risk-and-reward capitalism." But buying an MLS team is not an act of altruism.

That's why the after-the-fact news of this $30 million state handout — $15 million now, and another $15 million next year, for some reason — is so galling. Especially since it seems to have come out of nowhere.

It is true that we had known that a smattering of local public largesse would be forthcoming, but nothing beyond what's ordinarily done for other projects in this, the Age of Corporate Welfare. There would be two or three special sales districts set up on stadium purchases to contribute to its cost, there'd be a $1 million-plus property tax break, the owners would save $4.5 million through a sales tax exemption and half the city's five percent ticket tax would be abated.

None of this resembles Adam Smith capitalism, but so it goes. Those details were dutifully noted August 25 in a St. Louis Post-Dispatch story headlined "'Clearly a better deal': City taxpayers' opposition to 2017 MLS stadium plan worked out in long run." That referred to the inane, failed effort to stick the cash-strapped city with a sales tax to benefit a prior ownership group.

This was all good news. And the story even contained a stunning quote from MLS Commissioner Don Garber: "If not for that failed vote, we wouldn't have been able to have really attracted the interest of the Taylor family."

What a nice and flexible man Garber turned out to be. Why, as recently as March 27, 2017, this very Garber had performed a solid Marlon Brando impression in saying — and I quote from a St. Louis Public Radio headline — "No public investment in soccer stadium, no team in St. Louis."

Now, you don't see that sort of turnabout every day, but all's well that ends well. St. Louis got its MLS team, and we got it with a relatively small amount of public funny money. Or not.

Turns out that readers of the August 25 Post-Dispatch story might have wanted to pay closer attention to its seemingly innocuous 23rd paragraph:

"Lt. Gov. Mike Kehoe, who was at Tuesday's announcement and whose late uncle was St. Louis soccer legend Bob Kehoe, sits on the MDFB board. He told the Post-Dispatch that he and Parson have 'a great relationship' with Mayor Lyda Krewson and 'we'll absolutely be a partner going forward. There's no doubt in my mind.'"

Until last week, that harmless reference to the MDFB — the Missouri Development Finance Board — barely seemed worth noting. There was no hint that when Kehoe said "we'll absolutely be a partner" he really meant to say "we'll absolutely be handing out $30 million to these fine billionaires."

I'm a capitalist. I don't care if our new ownership group turns a billion-dollar profit on their enterprise. Good for them that they're local heroes. We should wish them nothing but the best, financially and otherwise.

But when will we ever learn?