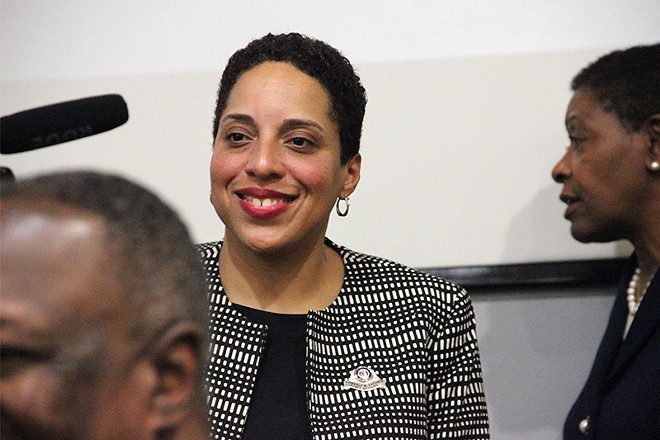 In a news release, Gardner announced that her office and the city Board of Election Commissioners have created a hotline for voters who encounter intimidation or other problems at the polls.

“A free and fair election is the foundation of our democracy, and we will not tolerate any attempts of voter suppression at the polls,” Gardner says.

Under Missouri law, voter intimidation can include threatening, impeding, preventing, or coercing anyone from attempting to vote. Providing incorrect information to confuse or prevent voters from voting is similarly illegal, like purposefully stating the wrong time of the election or spreading false information about voting requirements.

Voters should call the hotline if they notice any disorderly conduct, breach of peace, violence or threats of violence at the polls on Tuesday, Gardner says. All of these acts can result in criminal or civil penalties.

Gardner is especially concerned with voters being turned away if their eligibility or credentials are questioned. While poll watchers and challengers may be allowed to contest voter eligibility, they can only raise these concerns with poll workers. They're not allowed to interact with voters directly.

An eligible voter, Gardner says, cannot be denied a ballot solely because their qualification is disputed by a poll watcher or challenger. Poll workers are the only ones capable of determining a voter’s eligibility. If a voter's eligibility cannot be verified immediately, they should be given affidavit ballots to complete on site, with further investigation continued later.

Any voter who experiences intimidation should call the hotline, Gardner says.

"We stand ready to protect the integrity of our elections,” she says.

If you notice any issues affecting your or other voters on Tuesday, call the hotline at 314-309-8344.

Voters can similarly call the Missouri Voter Protection Coalition at 1-866-OUR-VOTE (8683) for any general voting questions or issues you may have. Volunteering as "election protection," this crew of lawyers takes part in a year-round effort to help voters complete their civic duty.

No matter the issue, these St. Louis efforts are here to protect your right to a fair vote and ensure you a smooth voting experience on Tuesday.