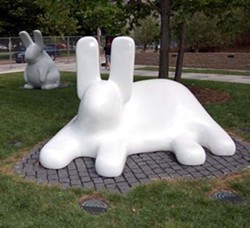 Photo: Nick Lucchesi
Will the Citygarden hares win this race?
Citygarden is one of five finalists for this year's Open Space Award from the Urban Land Institute.

The organization made the announcement yesterday. The St. Louis attraction that opened in 2009 is competing against two public spaces in Houston and another pair of locations in Portland

With a design that draws on St. Louis' chief natural feature -- its rivers -- the 2.9-acre Citygarden has attracted diverse users, catalyzed nearby development, and changed perceptions of downtown. Situated on two blocks of the underutilized Gateway Mall, the active sculpture garden has drawn an estimated one million visitors since its opening.

The winning space gets a $10,000 cash prize to be awarded to the individual or organization most responsible for the creation of the project.