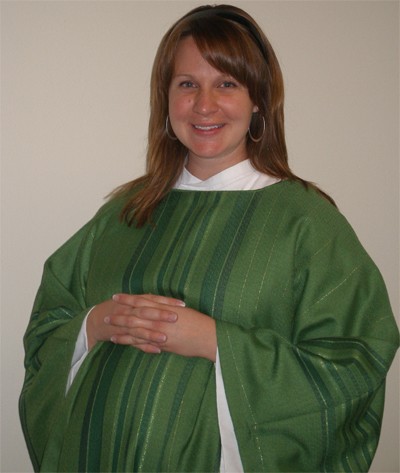 A little over a year ago, 26-year-old Jessica Rowley shattered the stained-glass ceiling, so to speak, by being ordained a Catholic priest. Now the St. Louisan is on the verge of giving birth to her first child, and a Washington, D.C.-based group that advocates for women’s ordination says that makes Rowley the world’s first pregnant Catholic priest.

"I'm due November 19, but the doctor believes it could be any day," says Rowley. "I'm feeling very ripe."

Rowley is one of roughly a dozen pastors with two X chromosomes presiding over churches in the Ecumencial Catholic Communion, a splinter group of the Roman Catholic Church.

Members of the ECC, which formed in 2003, don’t claim any papal lineage, in contrast to Roman Catholic Womenpriests, another splinter group that ordains women and which does claim direct ties to the Vatican.

St. Louisans Ree Hudson and Elsie McGrath became Womenpriests last fall, causing quite the hullabaloo in the Archdiocese of St. Louis and prompting former Archbishop Raymond Burke to ex-communicate both women. Rowley, though, says she never heard a peep from the Archdiocese, and doesn’t expect to.

Ecumenical Catholics believe in promoting lay people to positions of leadership within the church and, obviously, in the ordination of women. In the ECC, priests are allowed to marry. The church also welcomes into the fold groups that have traditionally been marginalized by the Roman Catholic Church -- divorced people, gays and lesbians, for instance.

Rowley grew up in Chicago and attended Catholic schools there. She got her Master's of Divinity here in St. Louis at Eden Theological Seminary and last year became associate pastor at Sts. Clare & Francis, the ECC Church in Webster Groves which was formed in 2005 by former Roman Catholic priest Frank Krebs. He and Rowley share the pastor-ing duties. Their congregation numbers about 90, and consists mainly of ex-Roman Catholics.

Rowley says her congregation cheered when she told them she and her husband, a minister for the United Church of Christ, were expecting.

So what church – the ECC or the UCC -- will Rowley’s baby boy join?

"That's a good question," says Rowley, with a laugh. "It's a topic of conversation in our home a lot. We're going to baptize him in both churches. But eventually he'll be able to make a decision for himself."