SCREENSHOT
Corrections Officer Demeria Thomas at the door of Edward's cell as Antonio Holt and Kevin Moore leave after the beating.

Demeria Thomas, 38, was sentenced to the maximum penalty, four years, after pleading guilty to deprivation of rights under color of law, a civil rights charge.

The beating was the subject of an RFT cover story last year. The victim's mother spoke to the RFT under the condition that we only refer to her son as Edward. 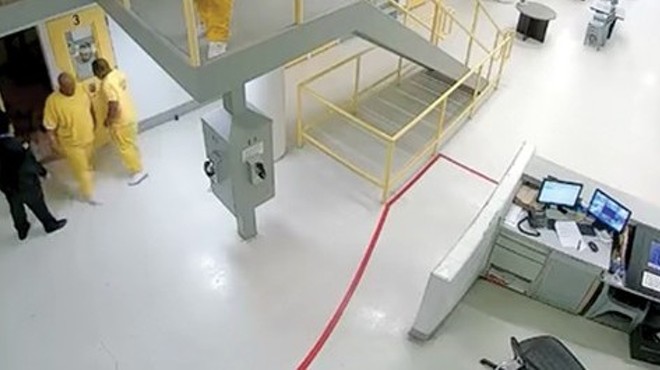 Searching for Answers After a St. Louis Jailhouse Beating

Surveillance video from the jail taken on March 22, 2021, shows detainees Kevin Moore and Antonio Holt speaking with Thomas at her guard station.

Thomas then stands idly by as Holt enters Edward's cell and beats him for about thirty seconds. Edward is seen on the footage falling over his cell's toilet. Holt continues to beat him while he's down. Moore then enters and strikes Edward several more times. When other inmates hear the assault and approach the cell, Thomas orders them to stand back. After the beating has been going on for a full minute, Thomas slowly walks over to the cell and puts an end to it.

"He's dead," someone can be heard yelling, though this turned out not to be true.

Video of the attack was played today at Thomas' sentencing.

In April, one of the assailants said that the victim's "cussing back and forth" with Thomas inspired her to order Moore and Holt to initiate the beating.

An FBI agent who took the stand for the prosecution said that in April he interviewed Moore about the circumstances surrounding the attack. According to the agent's testimony, Thomas told Moore she’d had a verbal altercation with Edward and she wanted Moore to “whoop his ass.”

If Moore refused, the agent said, Thomas threatened to file an indecent exposure complaint against Moore.

Thomas' attorney, Terence Niehoff, said that the conditions in the City Justice Center were so dangerous that Thomas "melt[ed] down under extreme pressure."

Judge Schelp did not mince words before he handed down the full sentence to Thomas. “You just left someone to die,” he told her.

The judge added that he hoped while Thomas was serving her time that she was not subjected to what she subjected Edward to.