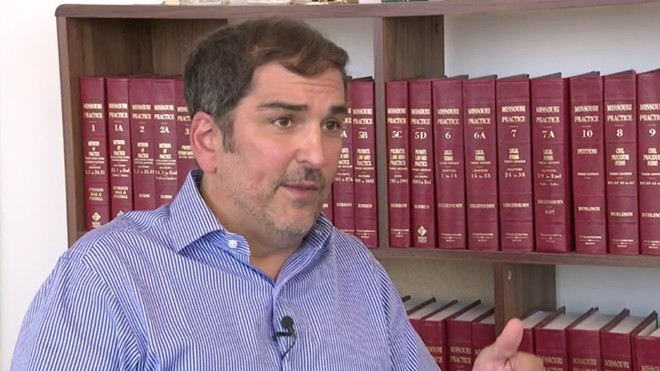 The St. Louis County Counselor's Office has taken "unprecedented" measures to prevent one Webster Groves family and their lawyer from speaking to the media about ongoing litigation over a euthanized dog, according to the family's attorney.

In recent weeks, a lawsuit brought by Erin Bulfin against St. Louis County has led to the county requesting a gag order on Bulfin and her lawyer, Mark Pedroli, and that one media organization hand over its interview footage with Pedroli discussing the case.

The lawsuit stems from December 2019 when the Bulfin family dog, Daisy, nipped at Bulfin's daughter. According to her lawsuit, Bulfin called county animal control and was told that Daisy needed to be quarantined for 10 days in an animal-control facility or at a veterinarian's office or in a boarding facility.

However, Bulfin found out the dog could be quarantined at home, so she returned to the animal shelter the next day to retrieve Daisy. But Daisy had been euthanized less than two hours after being dropped off.

Bulfin sued St. Louis County. For two years, the case meandered its way through the courts.

Then, on June 30, KSDK aired a piece about the Bulfin's suit.

The next day, according to emails obtained by the RFT, County Counselor Beth Orwick sent KSDK an email requesting that the station hand over the footage of the interview Pedroli gave for the piece.

"I would like to discuss obtaining footage of Mr. Pedrolli's [sic] interview that was part of your story," Orwick's email said in part.

Then, three weeks later, the County Counselor's Office filed a motion in court requesting that Judge John Bodenhausen implement a gag order in the suit. If put in place, a gag order would forbid both Bulfin and Pedroli from speaking to the public about the ongoing litigation.

On Twitter, Pedroli wrote, "This is an unprecedented request in the STL region. We're going to fight this as hard as it should be. Everyone has a right to know about their government."

He added: "Even more amazingly, the gov is asking the court to PROHIBIT the release of sunshine/FOIA documents to the general public.”

On August 5, the Bodenhausen denied the motion requesting the gag order, writing that the county has, "not identified what specific prejudice they have suffered as a result of pretrial publicity."