St. Louis County Employees Told To Keep It in Their Pants on County Property

The County Council is cracking down on getting down 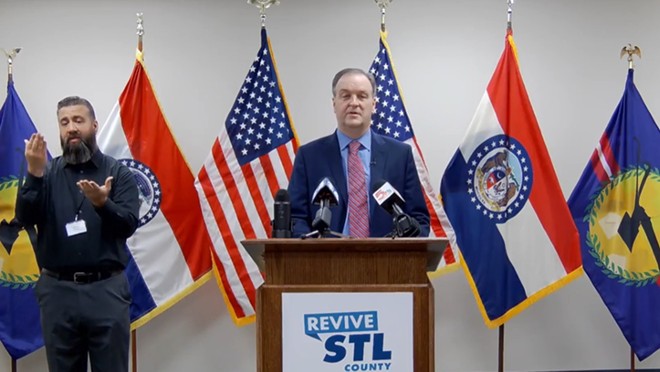 A measure recently approved by St. Louis County Council asks county employees to simply keep it in their pants.

The rule may seem a no-brainer, but apparently employees need to be reminded not to have sex at their workplaces after a leaked video in June showed a former St. Louis County employee having sex with a woman in the county administration building. Calvin Harris, former chief of staff for County Executive Sam Page, resigned shortly after the video surfaced as the person in the video was wearing his name badge and appeared to be him.

Fitch's bill bars county employees, appointees and any elected county official from engaging in "any act of a sexual nature" while present while on county-owned property or in a county-owned vehicle. Violation of the ordinance would result in suspension or discharge of the guilty employees.

The measure awaits final approval from County Executive Sam Page. There's no word yet on whether Page plans to sign the measure.

In an email to the RFT today, Page spokesman Doug Moore said Page will review the amended bill and make a decision in the next few days.

"Everyone agrees that sexual activity in county buildings is wrong and won't be tolerated," Moore wrote. "Dr. Page took immediate action when he found out."

Page didn't publicly address his former aid's sex video until a week after its existence came to light. At a press conference, he called the video "wrong" and told reporters he wasn't aware of the video until state investigators came to interview Harris at the county executive building the day he resigned.

The incident is currently under investigation by the state Highway Patrol. State law restricts nonconsensual dissemination of private sexual images, and a lawyer for the woman in Harris' video has claimed his client did not consent to the recording or release of the video.