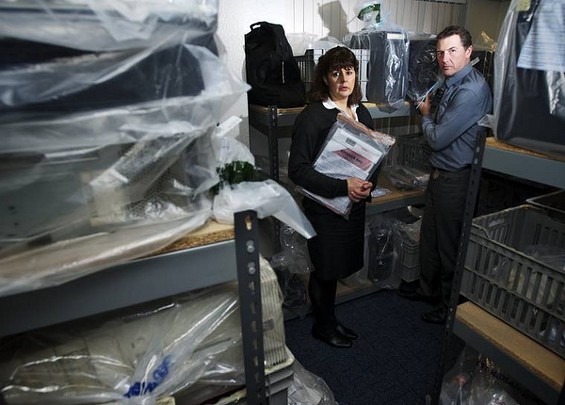 The Internet has revolutionized sex trafficking, moving pimps and their (mostly) female victims off the streets and onto online social networks, including Backpage.com and even Craigslist.

That's why County Executive Charlie Dooley is asking the St. Louis County Council for $250,000 to build up the police department's computer forensics laboratory and hire two forensic examiners. Dooley will present his proposal to the council for a second reading Tuesday night.

Pat Washington, the county's director of communications, says expanding the forensics lab is a priority that came from the police department, where officers are catching more and more human trafficking and child pornography cases. The plan is to ask for $250,000 now and then work an additional $500,000 into the 2015 budget for forensic equipment and staff.

via
County Executive Charlie Dooley will ask for $250,000 for a bigger lab.

"It allows them to get the expertise and capacity when they make arrests to go into computer systems of victims or perpetrators and find out exactly what is going on," which can help put perpetrators behind bars, he tells Daily RFT. When police find one trafficker, they can use computer forensics to find other perpetrators in that trafficker's network. "I think they are going to learn a lot about networks, who is involved. The primary way you find girls is through the Internet."

"We probably need more money than what they're proposing," O'Mara tells Daily RFT. "[Traffickers] are out there, and our job is to give whatever resources to stop it."

Washington says the county is reaching out to Representative Ann Wagner -- who recently sponsored the Stop Advertising Victims of Exploitation Act, which would criminalize advertising sex with people held in sexual slavery -- to find federal grant money to support the county's lab expansion.

"I don't know that we'll be able to fund that entire half million, but we will step up our efforts to seek federal dollars," Washington says.

But there's more to fighting human trafficking than just catching the bad guys.

Washington says the rest of the county's plan includes support for victims, especially children. Washington said county staff would be trained in how to identify and work with victims.

"It's still a scary situation for a young woman or girl who doesn't know what to do," Malott says. But if more county staff can identify victims and match them with law enforcement, it could help police bring down the traffickers.

"The big first step is getting that positive interaction with law enforcement, even if it is overwhelming," Malott says. "Sometimes, having a person there to connect with them and offer support, it's beneficial for law enforcement. [Victims] feel more comfortable talking to law enforcement."