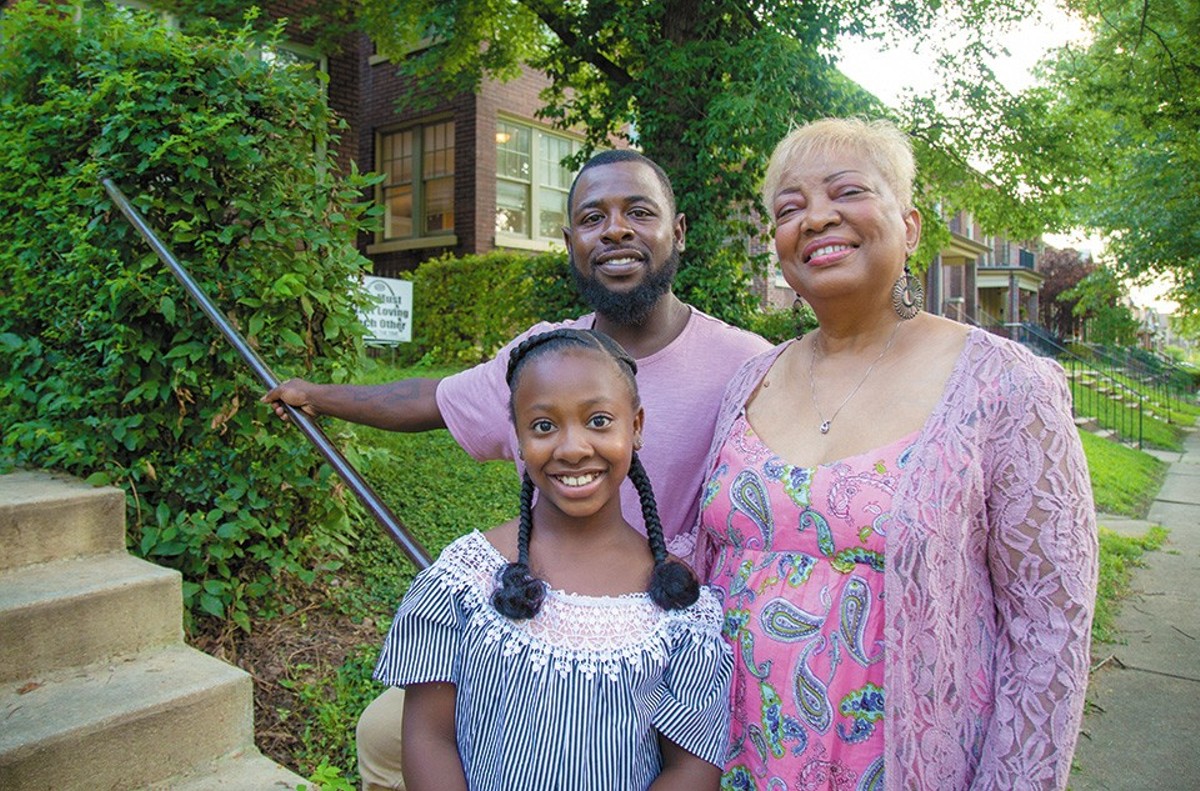 Ariel Gibson, with father Leon Gibson and grandmother Cynthia Wren, is one of the 2,488 students who applied to VICC last year. MONICA MILEUR 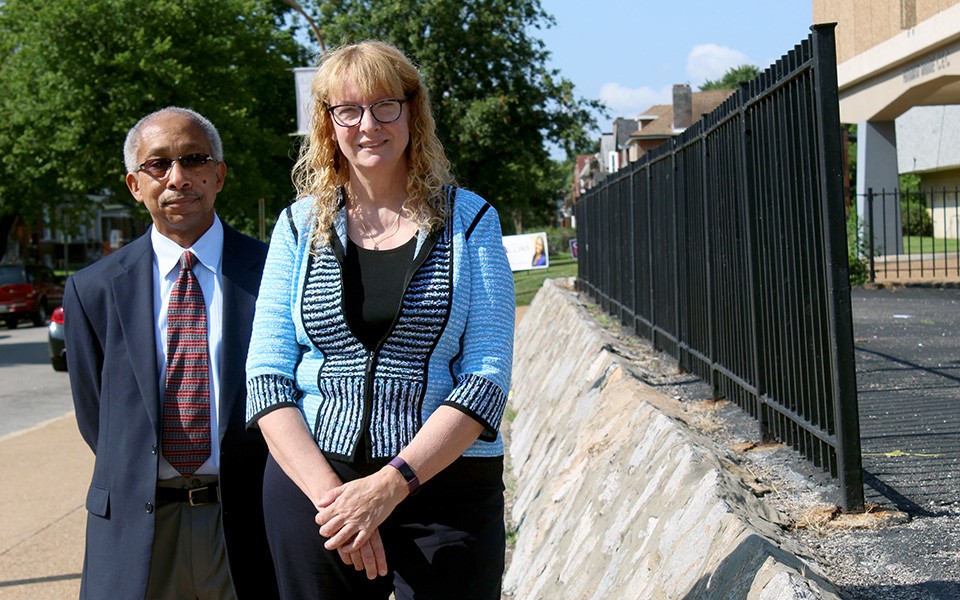 LEXIE MILLER
Veronica Johnson, right, and William Douthit, of Education Equity LLC, have fought on behalf of the NAACP and the Liddell family, respectively.

As the VICC program has been winding down, so has the number of black students in the participating county schools.

According to data from the Missouri Department of Elementary and Secondary Education, the eleven county school districts still in VICC today saw an average black student enrollment in 1991 of 20.17 percent. By 2017, it had dropped to 14.9 percent.

The county has grown more racially diverse during that time, but not nearly enough to make up for the reductions in the program.

In 1980, 45.6 percent of people living in the city were black. In the county, it was 11.3 percent. Fast-forward 38 years, and the city's percent of black residents remains similar, at 47.9 percent. Meanwhile, the county's black population has grown to just 24.7 percent.

It's a much smaller percentage in some individual districts. Clayton's black population in 1980 was just 2.7 percent. Today, it stands at 8.4 percent.

Johnson and other NAACP lawyers believed in the 1990s that the diversity created through the desegregation program would change decisions in housing for those students as they grew older.

"Well, that was the hope," she says. "We had hoped at one time that the program would result in less segregation. Apparently, it has not."

As the nation's longest and largest desegregation program, VICC has outlived lawyers, educators, legislators and even Minnie Liddell, the mother of five who led the lawsuit that kicked everything off. The lead plaintiff in the case was her son, Craton Liddell.

The Liddell family was living in north St. Louis in the 1970s. Ever-changing school zones left Minnie's children bouncing around from school to school, without receiving adequate resources and education along the way. Their lawsuit over those conditions led to the desegregation program that still continues today.

The youngest of Minnie's five children, Michael Liddell, 42, attended magnet schools in the city in the 1980s. The magnet program was expanded, improved and designed for diversity increases as a direct result of the family's lawsuit, and all five Liddells eventually attended them.

Though Michael believes his mother would be ecstatic about St. Louis' desegregation program running so long and educating so many students, he thinks she would understand that now, it's a different battle.

"I think the next step is to fight for whatever we have left in the city. No matter what the division of races are," he says. "We need to fight for better resources and better teachers. It's a struggle out here."

Even before VICC hit its expiration date, Daishanae Crittenden, nineteen, struggled to get her two youngest brothers, both ten, into the Clayton School District through the program.

Crittenden entered the VICC program as a third-grader in 2007. She was placed in Clayton.

Six years later, it was time for her twin brothers to begin kindergarten. High enrollment numbers in the district in 2013 made it challenging for the two to get spots in Clayton even though they had sibling seniority.

What made Crittenden so fearful was what could become of her brothers had they not been accepted into VICC.

Crittenden grew up in west St. Louis. There, she perceived clear differences between her education and those of her neighbors who attended SLPS schools.

"I was living in the inner city," she says. "My neighbors, their English was so bad. I am so blessed that my mom did as much as she did to get us into Clayton because I would be illiterate just like the rest of these kids out here that are going to these neighborhood schools."

Crittenden is now in her second year studying elementary education at the University of Missouri in Kansas City. Her scholarship program at UMKC is designed to help students who want to teach at urban schools.

Unsurprisingly, Crittenden credits her Clayton education through VICC for her collegiate success. And her family's story is shaping up to have a happy ending: Her two older brothers, seventeen and fifteen, attend Clayton High School, while the twins, ten, are in the fifth grade in one of the district's elementary schools.

By applying for VICC, and the sheer luck of being chosen, all four siblings have a much better shot at a good education than their peers back in west St. Louis. But what happens to families like theirs in the future? Each year, the odds of a city kid being chosen for transfer become more and more of a longshot. In five years, it may not even be a possibility.

Knost, VICC's most recent board chairman, admits there aren't many certainties for St. Louis pupils in the years to come. But, he says, "What's definite is that the appreciation for and the interest in what VICC does remains very high."

It took nine years from the Liddells' first court date to the implementation of the original transfer program. With five years left, Knost says it's too early to make any concrete plans for its next iteration — but he says there will be one.

"Obviously, we are going to have some plan in place in 2023," he says. "Actually, well before that. This is not something we will be waiting up until the last minute for." 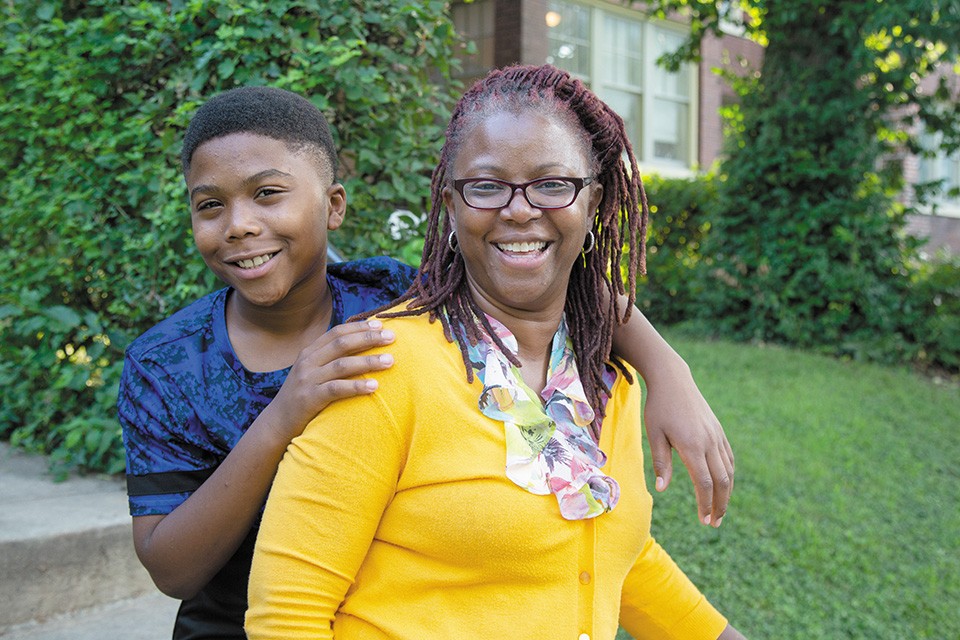 MONICA MILEUR
"I wish that the schools in the city had the same opportunities so that I could send him locally," says Kristina Darden of son Mansa Lyons, who attends Parkway schools through VICC.

Despite that tenuous future, St. Louis families continue to rest their hope in the program.

Kristina Darden, 48, lives in south city. Her son, Mansa Lyons, ten, attends school in the Parkway School District through VICC. Before he got into the program just over two years ago, he attended a private school.

SLPS was never an option for Mansa, Darden says.

"I wish that the schools in the city had the same opportunities so that I could send him locally," she says. "Because they aren't there yet, I'm grateful for VICC."

In some ways, getting Mansa in was like winning the lottery. Darden's sister, Cynthia Wren, hasn't been so lucky. With help from Ariel's father, Wren continues to pay tuition at Tower Grove Christian Academy for her granddaughter, even though it means Wren is often behind on other bills.

She still holds out hope for a VICC placement, even in the program's final years.

"If she got in, I would know she is getting a quality education and it wouldn't come at a cost for me," Wren says. "But year after year, it's just not happening. There would be so many more opportunities for her if she was in VICC."