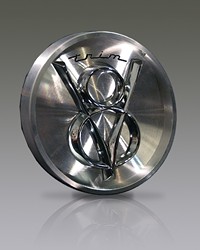 "The '57 Chevy had this amazing cloud pattern," Maurce says. "It doesn't just look cool, the fabric tells a story."