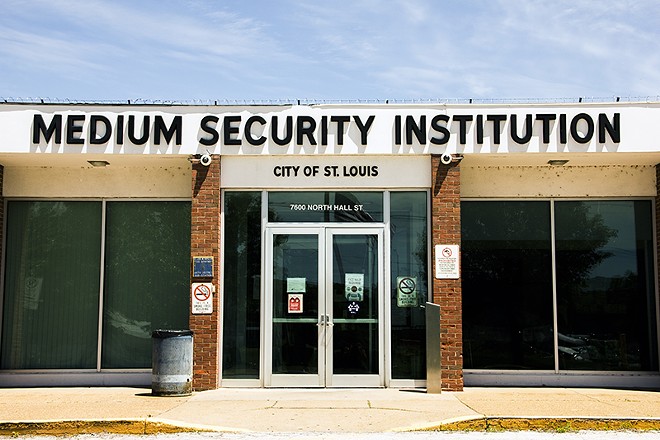 Danny Wicentowski
The Workhouse, also known as the Medium Security Institution, will only host overflow inmates.

With two weeks left to meet the self-imposed deadline to close the Workhouse, public safety director Dan Isom announced today the city has moved the last of its detainees to the City Justice Center.

"This is a major accomplishment," Isom said in a press phone call. "We are pleased with our current progress despite the case backlog due to COVID-19 and other major factors. The city is working hard to meet its goals, and repairs and upgrades are going well at the CJC."

Isom says the staff is meeting its timeline to close the Workhouse, officially named the Medium Security Institution, while keeping the health and safety of detainees and staff as a top priority.

However, as part of a "contingency plan" if the CJC becomes overcrowded, the Workhouse will have a single unit open to host any overflow of detainees. The overflow to be held at the Workhouse has not been decided. Isom said he hopes the number will be "fairly minimal."

The CJC can hold 850 people. As of today, there are a total of 569 people confined, according to the mayoral office's spokesperson Nick Dunne. Isom said with the last of the people being moved from the Workhouse, the CJC is at about 95 percent capacity. However, since the two jails will now combine their staffs, Isom feels there is an adequate amount of staffing at CJC.

"We have developed contingency plans as we work to get the CJC fully upgraded so that the entire MSI complex can be rendered obsolete. At this point, there isn't a need for an overflow into [the Workhouse]," Isom said. "However, we are always planning for contingencies."

Isom added the city is working with the U.S. Attorney's Office and the St. Louis Circuit Attorney's Office "to make sure the proper people are being held" in jail and that they are keeping their numbers down to avoid overcrowding.

"The population has been greatly reduced," Isom said. "We are at a point in which we can manage the numbers in our CJC facility, but that will be an ongoing process as we work with our partners to keep those numbers low."

The city is still working on repairs at CJC as they transition away from the Workhouse. Isom said that work should not impact the ability to hold those incarcerated in the city. Federal inmates have also been moved to other states to reduce capacity. Isom said the administration is working on a plan to ensure the detainees remain connected to their families.

The city is paid to house federal inmates, so St. Louis will see a loss of that revenue as those people go to other facilities. Isom said a decrease in the cost to feed and provide medical care to them will help cover the lost fees and there could be other budgetary adjustments to absorb the rest. Dunne said the mayor's office also provided Board of Aldermen President Lewis Reed with a list of recommendations for revenues that could offset the budget shortfall.

"These are revenue sources the budget director Paul Payne has identified that already exists, so we won't be making any unnecessary cuts or will be at any additional expenses for the taxpayers," Dunne said.

The Workhouse has long faced calls for its closure. The 56-year-old facility saw a flashpoint in 2017 when detainees were filmed screaming through the windows about blistering heat. Those locked inside claimed temperatures sometimes hit 110 degrees, leading activists to ramp up the campaign for its closure. Then-Mayor Lyda Krewson quickly installed temporary air conditioning units, but critics saw the move as a band-aid. The situation escalated from there, with a class-action lawsuit alleging "hellish conditions."

With rare video footage released last month, the public was offered a look inside the place some describe as hell. The video shows insects crawling near the kitchen and the roof leaking water. The footage included views of sections that shut down by superintendent Jeffrey Carson, who said in the video he "didn't like the feel" of certain, aging parts and described a unit as "like an old dungeon."

Mayor Tishaura Jones made a promise to close the Workhouse a prominent part of her mayoral campaign. But as the deadline she set nears, critics on the Board of Aldermen claimed that shutting down now would force overcrowding at CJC and put detainees and staff in danger. With today's announcement, the mayor has struck something of a compromise, hitting her deadline to close the aging jail, but leaving it as an option to alleviate any future overcrowding at CJC.

Isom said the closure of the Workhouse was just one part of a three-pronged approach to help the city reimagine public safety. The city is working with the U.S. attorney and the circuit attorney to try and clear the COVID-19 backlog of cases. Isom added the administration is investing in diversion programs "to help those who don't belong in jail in the first place."

"We want to get support and treatment and help those in need," Isom said. "So, these are all the things we are doing to reform the process — and close MSI."

Note: The original version of this story had an incorrect count of inmates confined due to the city's website having incorrect data. It has since been updated with the correct number. We apologize for the error.