St. Louis Fifty Years Ago: How Engineers Marketed The City To Outsiders (VIDEO) 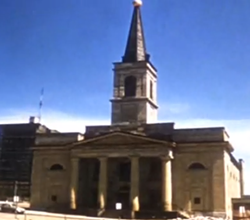 Here at Daily RFT, we like to take a trip down memory lane every once in awhile, and this week a video is making the rounds that takes viewers right to the streets of St. Louis in 1963. Recently posted on Reddit -- but uploaded to YouTube a few years ago -- the video comes from Bill Kendall, a retired engineer who now lives in Florida and grew up in south St. Louis.

"I made that film for my boss...to get some interest in people coming to St. Louis," Kendall recalls to Daily RFT.

What made St. Louis appealing in 1963? Watch the video below -- and transport yourself to St. Louis half a century earlier.

A 27-year-old engineer with Emerson Electric at the time, Kendall tells us he was assigned to make a video to try and entice people from around the world to come to St. Louis for an international engineering conference.

"I just wanted to show them some of the things the city offered," says Kendall, who is now 77. "It was very successful -- a lot of people came."

Since posting it on YouTube, Kendall says he's gotten a lot of feedback from people who enjoyed getting an authentic glimpse of the city so many years ago -- some who even remember the exact baseball game he included in the film.

"I think a lot of people are interested in...looking back," he says. "I have several cousins that live in St. Louis...and they've written me to say that other people have sent them the video saying, you ought to watch this.... It's gotten around."

He adds, "I'm just glad people enjoyed it. That's why I put it up there."