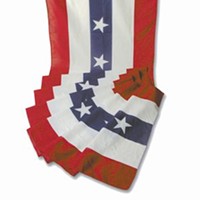 The St. Louis bid to host the 2012 Democratic Convention moved one step closer to reality yesterday when the city was named as one of four finalists for the event.

Other cities in contention are Charlotte, Cleveland and Minneapolis.

The event -- scheduled for the week of September 3, 2012 -- would be held at Scottrade Center and could bring more than 50,000 people to St. Louis with an economic impact to the city of a more than $266 million (based on numbers from the '08 convention).