St. Louis Firefighters Rescue Pit Bull Pups; Will It Come Back to Bite Us? 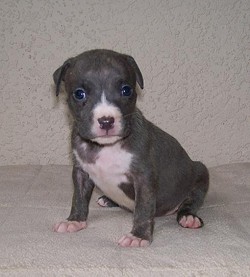 Pit bull pups. So adorable -- today.
I admit. Perhaps if they were golden retrievers or a less menacing breed of dog, I'd feel a bit more compassion for the big news story of yesterday.

As you've probably heard, a team of as many as twenty St. Louis firefighters reportedly spent six hours yesterday afternoon and into the evening trying to save five pit bull puppies in north St. Louis. The owner of the dogs had left them in a garage where the animals fell into a six-inch sewer pipe.

According to one account, the pups likely became trapped Wednesday night, but weren't discovered missing until Thursday midday when a neighborhood girl asked to see the puppies and they could not be found. Fire crews used ropes, water and even a Roto-Rooter technician to try to coax/flush the pups from the pipe. Three of the puppies survived the ordeal. Another was pulled out but died, and the fifth remained trapped last night and is likely dead.

No word on how the animals got into the pipe, but there must not have been a cover on the pipe opening. The Humane Society of Missouri says it plans to return to the home this week to monitor the condition of the puppies. Judging from the packed-dirt backyard littered with debris that was shown in newscasts of the event, the puppies weren't exactly living in pristine conditions.

St. Louis is currently experiencing a stray dog crisis and essentially has no animal control department to deal with dangerous canines. Aldermen in north St. Louis, where these dogs were trapped, say that stray dogs abound in their neighborhoods and threaten the safety of residents. In their minds, the city has a feral dog problem. The city's health department, meanwhile, says the city has an irresponsible pet-owner problem.

Oke-dokee. Still, one wonders: What will happen to these adorable pit bull pups once they become adults?

Let's hope that yesterday's incident was a fluke, and that the owner of the puppies is indeed responsible. Still, someone -- the city or Humane Society -- should monitor these pups for more than just the next week or two. And, we might suggest, get them spayed and neutered right away to prevent their offspring from tumbling into a similar fate and falling into the care of St. Louis taxpayers.

Keep up on all the latest St. Louis regional news and gossip by following @chadgarrison on Twitter and Daily RFT on Facebook.