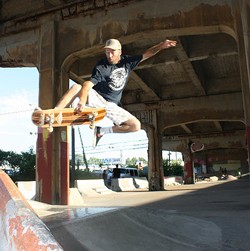 To be honest, the skateboarding community is a little burnt out on the fundraising for the new skate park, says Bryan Bedwell, the chairman of the board of directors for KHVT.

"The skaters of St. Louis have already been donating...hard-earned money for seven years now," Bedwell says. "They are kind of tired of it."

That frustration peaked when the skaters realized they were losing the Kingshighway park they built with their own time, labor and materials while the city replaces the crumbling structure.

"The city is tearing down our spot we spent all our money and time on," Bedwell says. "I'm thinking, 'Hey, you guys are basically tearing down our $100,00 skate park we built out of our own blood and sweat and whatever. At some point, somebody's got to pony up some cash."

So KHVT is looking outside its skateboarding community for funds -- and finding willing partners.

Team Pain, a company from Florida that builds skate parks all over the country, says it will build the park for St. Louis for free if KHTV can get land, supplies and volunteers. "Skate parks cost thousands and thousands of dollars, but [Team Pain] loves us, and they are behind us because we are one of the few major cities that doesn't have a free public skate park," Bedwell says. "They can't stand it. They think it's a travesty."

KHVT
4415 Morganford: Soon, there will be a skate park here.

KHVT also applied for and won a matching $5,000 grant from the Tony Hawk Foundation, which funds parks across the country. Usually, the foundation requires cities to have professional builders on-call before awarding funds, but KHVT's promise of volunteer labor won them the money.

KHVT is also working with local gardening groups, which bring their own funding to the project and will organize community planter beds in the skate park.

Now, the group needs $5,000 to match the funds. KHVT launched a GoFundMe fundraising page to ask for donations. Last year, the group raised $15,000 through a Kickstarter campaign.

But Bedwell doesn't mind working for the money.

"It breeds a feeling of ownership," he says.