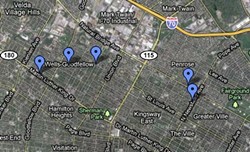 All five shootings occurred within about a mile of each other.
Five people were wounded in five separate shootings that played out over the course of several hours yesterday in north St. Louis.

View interactive map of the shootings.

The violence began around 4:40 p.m., when a victim described as a 20-year-old black male was shot outside a residence in the 4400 block of Ashland. The victim sustained graze wounds to his neck and head. Police are searching for two suspects described as two 20-something black males dressed in all black clothing with braided hair.

Several hours later -- around  8:54 p.m. -- a victim described as a 22-year-old black male was shot in the shoulder in the 5700 block of Kennerly. Police have no suspect descriptions for that shooting. The same goes for another shooting around 9:15 p.m., when a victim also described as a 22-year-old black male arrived at a hospital with a gunshot wound to the buttocks. He claims he was shot outside a convenience store at Natural Bridge and Taylor, although no one there could confirm it.

Around 10 p.m., a man described as a 40-year-old black male was sitting in his car in the 1500 block of Hamilton when two suspects came at him with a gun and demanded property. After robbing the man, the suspects -- described only as two black males -- shot him in the shoulder. He was in stable condition last night with a non-life-threatening injury.

And finally, around 10:40 p.m., a 17-year-old black male shot himself when he was climbing a fence near St. Louis Avenue and Semple, when a gun he was carrying accidentally fired and shot him in the leg. The gun was not recovered.