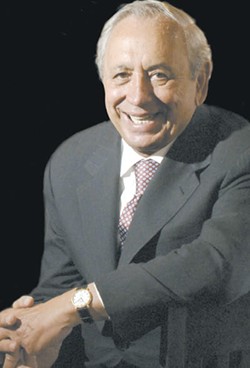 Photo of Lester Miller via St. Louis Business Journal
Lester Miller knows a thing or two about being filthy rich. He also knows what its like to be dirt poor. Maybe that's why he's taken such an interest in the rags-to-riches-to-orange-jumpsuit story of Bernie Madoff.

Miller, a 77-year-old Ladue resident, grew up in New York in a family of first generation eastern European immigrants. He sold newspapers until he dropped out of high school to become a traveling salesman. At age 23 he moved to St. Louis and started a family. His first businesses were companies that cleaned toilets and operated condom vending machines in public restrooms.

Eventually, he made a fortune in the plastic and battery industries and became known locally as a wild spender who indulged in vanity projects such as renovating the Old Busch's Grove restaurant, building yachts, and opening a sports bar bearing his name in Ladue that features a six-foot six-inch statue of Stan Musial and roughly 5,000 flat screen TV's.

But last week Miller trumped even Donald Trump with a spending spree in New York City. Miller caught the attention of the New York Times when he dropped a cool $100,000 on 20 bracelets that once belonged to legendary swindler Bernie Madoff and his wife Ruth.

The items were purchased at an auction last week that featured every piece of expensive crap Madoff ever bought with someone else's money. That includes a custom Mets jacket embroidered with Madoff's name (sold for $14,500), Cartier diamond earnings ($70,000), and a custom 1945 Rolex watch ($55,000).

Before you vomit on your keyboard, know that the proceeds of the auction went toward compensating victims of Madoff's massive ponzi scheme.

As for Miller, here's what the Times had to say:

Image Via
The sale began about 2 p.m., with about a minute of spirited bidding for a gold charm bracelet -- with a whale, a lighthouse and a shell -- that belonged to Mrs. Madoff. The offers quickly shot over the maximum listed value of $1,000. It sold for $3,500.

Lester Miller, 77, a businessman from St. Louis, bought that bracelet and 19 or so others, spending about $100,000. He said he would divide them among his daughters and granddaughters on a cruise to Mexico next weekend.

He said that he had never met Mr. Madoff but knew several people in Palm Beach who had lost money in his bogus investments. He added that he was pleased to help those people. "I think it's a nice thing," Mr. Miller said. "The more you can bid, the better off you are."

Asked what he would tell his granddaughters when he gave them the bracelets, he said, "If it's too good to be true, it's not right."

So wait-- you're lounging on a cruise ship in the warm Mexican sun, sipping a fine cerveza, then someone hands you a $3,500 charm bracelet that once belonged to the most famous white-collar criminal of all-time -- what's not "too good to be true" about that?