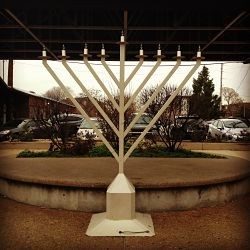 At Market in the Loop, a menorah is ready to get all lit up on Saturday night.

The Jewish festival of Hanukkah (or Chanukah, if you can manage that guttural "ch") starts Saturday night at sundown. A few weeks ago, Jimmy Kimmel ran a segment on his show called "Hipster or Hasidic" in which the audience had to determine whether a series of beards belonged to Brooklynites of the hipster or Hasidic persuasion.

You may think these two facts are unrelated, but they are not. Saturday night, St. Louisans will have their own chance to be hipster or Hasidic at two separate community Hanukkah parties. Take this brief quiz to see if you can determine which party is which.

A. Hanukkah Hullabaloo B. Chanukah in the Loop

A. Market in the Loop (Delmar Loop), 7 p.m., free B. Off Broadway, 9 p.m., $8, with proceeds going to Rabbi James Stone Goodman's One Life, Whole World Project

A. Washington University Chabad, the Loop Business District and Market in the Loop B. The Brothers Lazaroff

A. A menorah will be present, borrowed from the STL Style House. B. Yes, on a nine-foot tall steel menorah, lit by oil and a wick. Rabbi Hershey Novack will do the honors; he was practicing with his torch as he spoke to Daily RFT.

A. A band comprised of students from Wash. U. and a number of special guests, identities still a mystery. Except that none will be Hanukkah Harry. B. Musical performances by the Brothers Lazaroff with Goodman, Will Soll's Klezmer Conspiracy and The Vaad, plus comedy from Thelonius Kryptonite and Kelsey McClure

A. There will be a motorized spinning dreidel disco ball hanging from the ceiling B. Small, plastic dreidels will handed out to guests, and there may be Dreidel Madness, a dreidel tournament, later in the week.

Category 7 (the most important): Will latkes (potato pancakes) be served?

A. Yes, fried by DJ Goldie and her sister-in-law as she spins "Chosen hits" B. Novack [in small, sheepish voice]: ....nooooo..... [sadly, regretfully] "It's very hard to provide latkes if they're not fresh. We could provide hard, cold latkes, but we wouldn't make any friends on the deal."

Answers after the jump.