St. Louis Haunted House Named One of the Scariest in the US

The Darkness has been around for nearly 30 years

Photo by Steve Truesdell
An actor scares visitors at The Darkness, which was named one of 2022's scariest haunted houses in the country.

A national magazine has named a St. Louis haunted house one of the 13 scariest in the country.

The Darkness, located in Soulard, earned fourth place in “America's Scariest Haunted Houses of 2022,” according to the publication, Hauntworld Magazine.

The magazine lauded The Darkness for its variety of ways to spook customers.

“Some rank The Darkness as the best haunted house in America due to its amazing set design and the industry's largest collection of monsters, animations and special effects, along with a huge gift store,” the press release read. “This season, The Darkness celebrates its 29th Year of Fear with a total renovation to make The Darkness longer and scarier than ever before.” 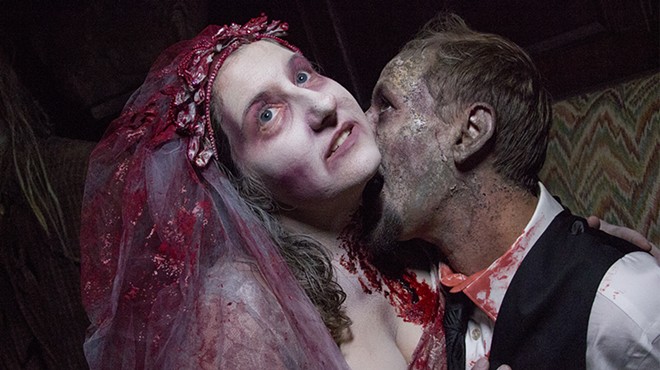 This Couple Loves Haunted Houses So Much, They Got Married at the Darkness

The Darkness, which opens on September 24, has been in operation for 27 years, earning TV features on Modern Marvels, MythBusters and the Discovery Channel. In addition to the haunted house, the recently renovated St. Louis staple features a horror-themed arcade, escape rooms, retro mini golf and a retail store.

Hauntworld has published its top-13 list for two decades. Its rankings featured haunted houses from all across the country, including Pennhurst Asylum in Spring City, Pennsylvania; The Dent Schoolhouse in Cincinnati, Ohio; and the Georgetown Morgue in Seattle, Washington.