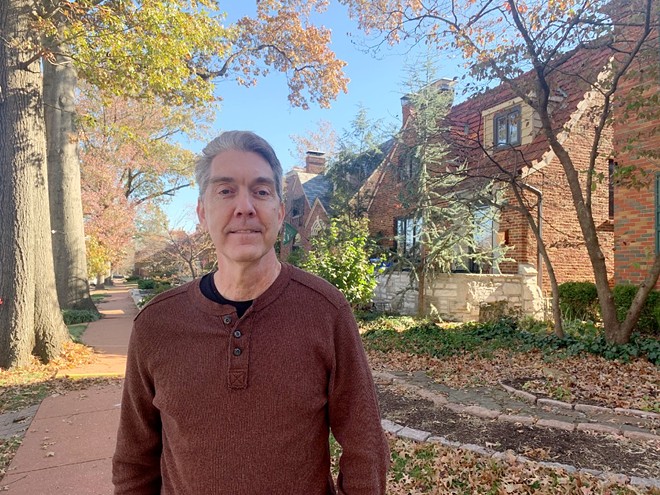 After someone carjacked one of his closest neighbors a few years ago, Tom Scheifler had enough.

His neighborhood, St. Louis Hills, did not feel the same as it did when he and his wife moved there about 30 years ago. Crime had become more and more frequent. As he watched local news, he became discouraged about the odds of the city’s seemingly stripped police force having the resources to do something about it. So he did something himself.

“I love this neighborhood, I love my neighbors,” Scheifler says. “I really, really hate the idea that we might feel compelled to move because of the crime.”

After years of work, Scheifler, a software programmer, created an app to detect crime through a network of cameras equipped with artificial intelligence. The cameras are owned and controlled by residents. Most blocks within St. Louis Hills’ 1.5 square miles now have at least one. Residents place them on trees, above garages — usually spots with street views.

Scheifler’s app notifies an off-duty officer paid through neighborhood funds of movement detected on the cameras, whether it’s people or vehicles. The officer reviews the footage on a tablet, and if the footage shows someone in the act of a crime, the officer responds to the scene.

Other affluent, predominantly white neighborhoods in St. Louis have opted for similar approaches to curb crime as the city’s police force buckles from staffing shortages.

Neighborhoods with the resources, such as Soulard and the Central West End, are increasingly turning to private security companies that employ off-duty officers for granular patrolling. A ProPublica investigation in September turned attention to these private police forces, which allow city officers to supplement their income while wearing their uniforms and using department-issued weapons.

The largest of several policing companies in St. Louis, the City’s Finest, employs about 200 officers, according to ProPublica. Scheifler’s system uses one officer through Campbell Security, which also employs off-duty law enforcement officers or military personnel for so-called “private policing.”

St. Louis Hills’ four-week trial period with an officer will cost about $8,900, according to Scheifler. The St. Louis Hills Neighborhood Association will cover the initial cost, but after the trial period, individual households throughout the neighborhood will be asked to contribute $15 a month.

Scheifler says he’s heard his “fair share” of criticism along the way. But he feels his security system could produce a net benefit.

Scheifler describes the system, called AwareNet, as a neighborhood watch “reimagined.” More than 100 residents bought cameras at a cost of $150 each that connect to Scheifler’s app.

Scheifler has zero access to footage, he says, except for the multiple cameras he’s paid to record outside his own home. Residents can only see footage from their own cameras. So many people have participated that most St. Louis Hills blocks now have at least one camera — which puts most residents at ease.

Patty, who asked to only be referred to by her first name, said someone tried to steal her car a few weeks ago and broke its windows. Eleven other vehicles on her street were hit in the same night, she says. In a separate instance, someone stole one of her neighbor’s trucks. Another neighbor lost a catalytic converter.

“I just hope word gets out that we’re watching you,” Patty says. “Don’t come in our neighborhood; we’ll know who you are.”

The theft of his house’s gutters prompted Jim Hennessey to use AwareNet. Copper gutters once lined Hennessey’s house. Their theft means he’s out an estimated $3,000. He hasn’t replaced them yet, because he fears the replacements will get stolen too.

“Just as I was ready to pull the trigger to call the gutter guy, my neighbor got hers stolen from her house,” Hennessey says.

AwareNet has so far led to one arrest: someone going block-to-block checking for unlocked vehicles, according to Scheifler.

Scheifler acknowledged that not all neighborhoods have the resources to organize and spend money on cameras. He’s also aware that his system could just push criminals to other areas. But he’s willing to provide AwareNet to other St. Louis city neighborhoods “at cost” and says volunteers can opt to check flagged footage versus paying for an off-duty officer.

“This is a way I can give back to the neighborhood, and perhaps the city,” he says.