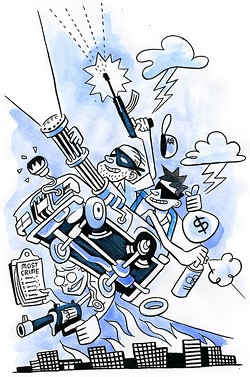 Dan Zettwoch
If there's a crime ranking, St. Louis will be top five.
Don't let any of those grumpy old guys tell you America doesn't manufacture anything these days -- no other country in the world cranks out as many internet lists as we do. It's our second-largest industry, after political shouting programs.

At any rate, it's Thursday and according to something called 24/7 Wall St., St. Louis is the third-most dangerous city in America. It's not as flashy as being number one, but our city fathers always dispute these things anyway, so who knows?

So, where did 24/7 Wall St. get its stats? It used the FBI's Uniform Crime Report for 2011 (most recent year available) for the total number of crimes, the 2010 Census for population, and the 2011 unemployment rates from the Bureau of Labor Statistics.

Interestingly, the FBI statistics come with a warning: "Data users should not rank locales because there are many factors that cause the nature and type of crime to vary from place to place." Yeah, well screw you, Hoover; 24/7 Wall St. ain't got time to heed. They're gonna rank cities in an easily digestible, top-ten list that will make for great headlines.

For its list, 24/7 Wall St. used just the four violent crime categories the FBI measured (murder, forcible rape,robbery and aggravated assault), and computed the incidence of those crimes per 1,000 citizens. Median income, poverty rate and unemployment rates are also included. Here's what that formula kicks out for St. Louis.