St. Louis Jails Stocked up on Pepper Spray as Detainees Complained of Abuse

At the end of 2020, the City of St. Louis placed an unusually large order for pepper spray to use in its two jails.

The city's public safety department wanted 30 small flip-top canisters, 30 large ones with pistol grips and 30 of what the Fenton-based manufacturer SABRE calls its Cell Buster, a 16-ounce canister outfitted with a hose that guards can use to slip under doors and fill an entire cell with a cloud of stinging chemical irritant in a matter of seconds.

It was the third purchase order of the year, which was in itself a marked increase in frequency from recent years, and it was the largest yet. The total price was $3,347, according to a December 2020 invoice reviewed by the Riverfront Times. For context, that's about 14 percent more than the previous two orders combined.

Life inside the jails had been growing increasingly tense at the time. Thanks to an activist-led effort, hundreds of people had been sent home from the jails in the past year to create a little more space and hopefully minimize the spread of COVID-19, but for those left behind, the situation had deteriorated. There were reports of virus outbreaks and healthy detainees trapped near sick ones. In addition, closed courts meant endless stays for defendants, who even in normal times averaged nearly a year inside before cases were decided. And new safety protocols had cut off family visits and limited detainees' freedoms even further.

No one was happy. A number of the problems could be attributed to the ongoing threat of the virus and a corrections department on its heels, but according to those riding out the pandemic inside, the problems went beyond logistical headaches to good old-fashioned abuse at the hands of guards.

In hotlines set up to take in complaints, nonprofit organizations the Bail Project and ArchCity Defenders fielded calls from detainees and their families about aggressive, retaliatory tactics. ArchCity and three other entities later detailed multiple allegations against the city and jail staff, including accusations that guards often punished detainees by shutting off water to units — and using egregious amounts of pepper spray.

For the general public, just how bad it had become at city jails first became obvious through two revolts in which detainees seized control of entire units, busted out exterior windows and shouted complaints to the outside world.

The sight of men in jail jumpsuits standing in the smoke-filled frames of broken windows, holding homemade torches aloft in the heart of St. Louis, was an embarrassing scene for city leaders, one that was replayed in national and international news coverage. Then-Mayor Lyda Krewson and Director of Public Safety Jimmie Edwards promised to address issues at the jails. A task force created to investigate problems was announced at a news conference as part of the response. Left unsaid, however, was that the city was quietly loading up on pepper spray.

Another SABRE invoice shows a February 26 order that dwarfed the December order for 90 canisters of varying sizes. Now the city wanted 800 more: 500 of the 3-ounce flip-top model, 200 of the larger pistol-grip variety and, perhaps most worrisome to advocates for those incarcerated in city jails, 100 Cell Busters. 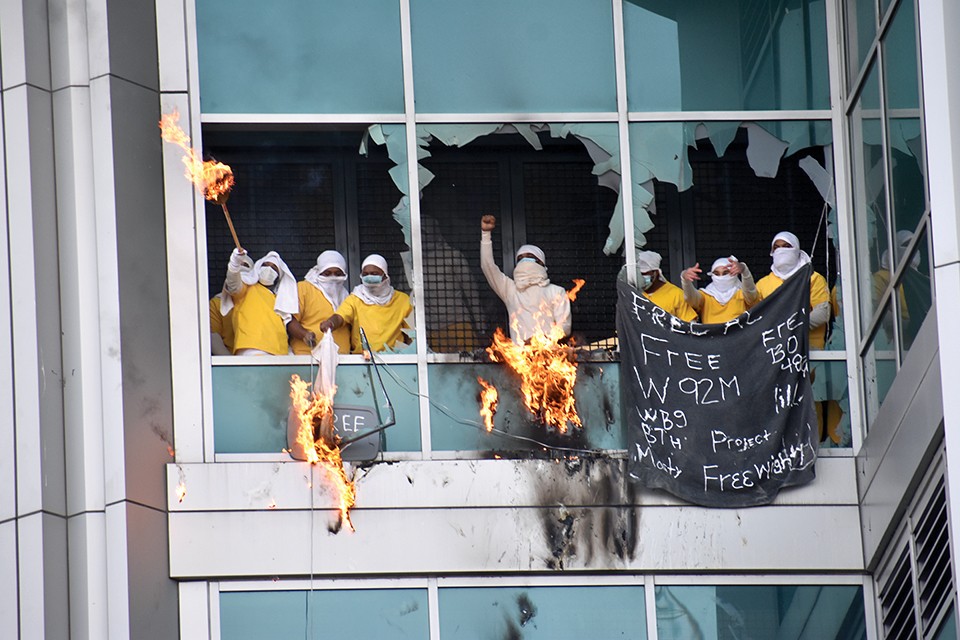 DOYLE MURPHY
Detainees took over the fourth floor of the City Justice Center on February 6, 2021.

So why do St. Louis' jails need so much pepper spray?

"It's anticipation," ArchCity Defenders attorney Maureen Hanlon says in an interview. "They're buying more chemical weapons because they plan to keep using chemical weapons — and at an increased rate."

According to jail policies, pepper spray is to be used only as a last resort to stop a threat, and then only as a way to avoid reacting with even greater, more dangerous force. It is supposed to be a tool that stops a detainee from, for example, attacking a guard or fellow detainee. But that is not the way Hanlon's clients say it plays out in reality. She and lawyers from Roderick and Solange MacArthur Justice Center, Saint Louis University School of Law Legal Clinics and Rights Behind Bars are representing three men in a lawsuit against the city and multiple members of the jail leadership and correctional staff.

In the suit, which was filed in May, they allege that pepper spray was a relentless presence at the City Justice Center, regularly used to attack rather than defend.

"The use of mace throughout CJC is inescapable given how often CJC staff deploy mace, and in such large quantities," the suit says. "For example, staff are often seen carrying or deploying large capacity or riot-sized cans of mace.

"Visiting booths often have tangible smell and residue from mace that is openly detectable for hours or days after a macing incident."

One of the plaintiffs in the suit, Derrick Jones, was beaten and maced by corrections officers in December 2020 for asking to be moved away from a cellmate who he suspected was sick, according to the suit. While in handcuffs, Jones was allegedly pepper sprayed a second time by a supervisor, Lieutenant Javan Fowlkes, and then taken down to a medical unit and locked in a cell there.

When Jones pounded on the door, asking for relief from the pepper spray on his face, Fowlkes sprayed him a third time and closed the door, saying, according to the suit, "Let him marinate." Jones was later placed in solitary confinement and had been there 161 days when the suit was filed in May. That wasn't an aberration, advocates say.

Another plaintiff claimed Fowlkes locked him, nude, in a cell and filled the room with mace, leaving him there for four hours. Still another said jail staff maced him without reason in a visitor's booth and locked him in for nearly a half hour while he begged to be let out and tried to suck clean air through a crack under the door.

"During Plaintiffs' confinement at the CJC, they were subjected to the infliction of pain and suffering by Defendants, who used chemical agents (mace) on the detainees without prior warning, and for the purpose of inflicting punishment and/or pain and suffering, not for security or safety reasons," the suit alleges.

Outside of their own incidents, the men said they saw corrections officers mace people for any reason or no reason, opening chuckholes in doors at times and blasting pepper spray into the cells.