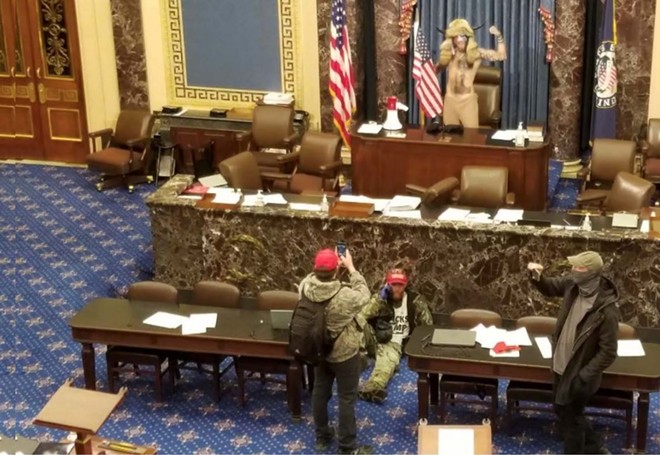 DOJ
An evidence photo shows Jacob Chansley, the "QAnon Shaman," on the Senate dais on January 6.

The St. Louis attorney representing a widely photographed member of the mob that burst into the U.S. Capitol on January 6 argues that his spear-carrying client did not commit the federal crimes of violent entry and disorderly conduct because, essentially, President Donald Trump had invited the mob to do so.

"He invited his faithful, those who had been longstanding supporters of him and his cause, those who felt for the first time in their lives that their political voices were being heard," lawyer Al Watkins said Thursday in an interview with the St. Louis Post-Dispatch.

Watkins said his client, Jacob Chansley, was not armed or involved in the day's chaotic violence that included a fatal police shooting and a trampling death, though an arresting officer noted that the 33-year-old resident of Phoenix, Arizona, was seen roaming the Capitol carrying "a six-foot spear with an American flag tied just below the blade."

Chansley was captured in multiple media sources at the rally and was among those who breached the Capitol after Trump urged his followers to reject the election results at the same time those results were being certified.

Watkins is a known character chaser among St. Louis attorneys. He previously represented the mansion-defending "gun couple" Mark and Patricia McCloskey. His new client, however, who was charged Saturday after a six-count indictment and jailed in Arizona, is a different flavor of Trump supporter: Before his appearance at the Capitol, Chansley was already known as the "QAnon Shaman," a bare-chested and horn-wearing conspiracy loon who frequented QAnon rallies and who once led a protest where he filmed himself attempting to expose "an FBI pedophile code" at the entrances to bathrooms in an Arizona mall.

Just so you’re aware, these people are NUTS! pic.twitter.com/lfAUWpWkDY


Chansley, Watkins told the Post-Dispatch, was a peaceful protester who "just walked in with the whole crowd" on January 6. The attorney later suggested that it would be "appropriate and honorable" for Trump to pardon Chansley and other "peaceful individuals who accepted the president’s invitation with honorable intentions."

But Chansley seemed to make his intentions fairly clear. One day after he and thousands followed the president's "invitation" to storm the Capitol, he told NBC News, "The fact that we had a bunch of our traitors in office hunker down, put on their gas masks and retreat into their underground bunker, I consider that a win.”

Read the full interview and story at St. Louis Post-Dispatch.