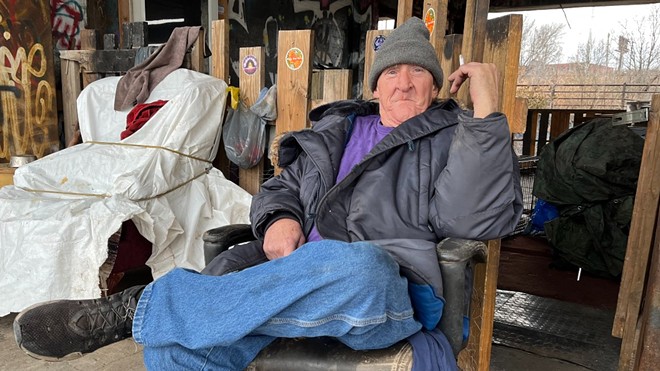 Ryan Krull
Ronald Benson outside his abode in the Cotton Belt building.

On December 21, seven individuals who are currently unhoused filed suit against the Missouri attorney general saying that the law, which went into effect on Sunday, is both vaguely worded and essentially criminalizes homelessness.

Attorney Stephanie Lummus, with the Cook Group, is representing the seven plaintiffs. After filing the suit, she asked the court for a temporary restraining order to stop the law from taking effect, but that was denied. She says that in the coming weeks, she'll be asking Judge Matthew T. Schelp to issue a temporary injunction, which would pause enforcement of the law while the suit makes its way through the courts. Ultimately, she is hoping the law is declared unconstitutional.

The new law prohibits "unauthorized sleeping, camping, or the construction of long-term shelters" on state-owned land, such as highway overpasses or state parks. But Lummus says the law doesn't provide any explanation about what counts as "unauthorized."

Lummus says that she is hoping to have the lawsuit eventually certified as a class action.

"You've got constitutional issues on the line," she says. "You've got people whose freedom is subject to go away. You can get basically thrown in a cage for being poor."

The law was part of a bill signed by Governor Mike Parson last June. Though it was introduced as a seven-page bill focused largely on county financial statements, by the time the bill passed it had transformed into a 64 page behemoth on different political subdivisions including the homelessness statutes championed by Representative Bruce DeGroot (R-Chesterfield) and Senator Holly Rehder (R-Sikeston).

Anyone caught breaking it could face a class C misdemeanor charge – a crime punishable with up to a $750 fine and 15 days in jail. Any municipality caught not enforcing the law could get slapped with a lawsuit by the Missouri attorney general. And any municipality with a homelessness rate higher than the state average within a year of the bill’s passage could lose state funding until they rectify the problem.

DeGroot previously said in an interview with the RFT that he thinks his proposal will help the unhoused.

He and Rehder thought that instead of combating the issue through permanent housing, Missouri should direct public funding toward mental health services and short-term housing.

In addition to banning "unauthorized" camping and sleeping, the new law redirects state funds otherwise used for permanent housing construction for the unhoused to mental health treatment and other services, including short-term housing.

Lummus’ suit isn’t the first to call the new law into question. In September, three Missourians represented by Legal Services of Eastern Missouri and Public Citizen Litigation Group asked a judge to block the bill from taking effect. The suit claimed the law violated Missouri’s constitutional requirement that legislation stick to only one subject.

One of the plaintiffs represented by Lummus, 63-year-old military veteran Ronald Benson says he's lived in the old Cotton Belt building near the Mississippi riverfront for four years with his dog, Rebel. "I've made this into a pretty nice little home," Benson says of his living area on the south end of the mural-adorned building that was once a freight depot but has been long abandoned. 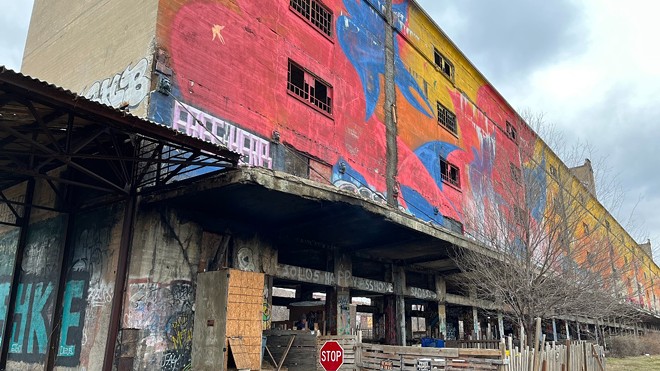 Ryan Krull
The Cotton Belt building near the riverfront, just north of The Arch.

It gets cold, Benson says, but with the help of a small propane heater and an antique wood burning stove, he manages.

Benson says that he initially moved into the building with the permission of the people who owned it at the time, but he has trouble getting in contact with the building's current owner Justine Petersen Properties. It took him two years "off and on" to build the space into what it is now.

Benson signed onto the lawsuit as a plaintiff because he's stayed on state-owned land in the past and is likely to in the future.

"Sure homeless people do create problems," he says. "But it's nothing like so that they need to herd us around like a bunch of cattle, which is pretty much how they treat us."

Ryan Krull is a staff writer for the Riverfront Times. Find him on Twitter @ryanwkrull