Photo: Emily Good
Bob Corbett
When Bob Corbett woke up at 4 a.m. Wednesday he had no clue what kind of day was ahead of him.

The St. Louis native and retired Webster University professor operates a Haiti email discussion list with thousands of subscribers, and at one point, owned the largest private collection of books and articles on Haiti. He has also visited the French-speaking island nation more than 50 times since 1982.

The magnitude 7.0 earthquake that struck Haiti on Tuesday made his discussion list a clearinghouse for those seeking information about family and friends in the country.

"It's been a wild day," Corbett recalled yesterday afternoon in his Dogtown home. "I've sent out more than 220 emails today and have received over 300."

Corbett said that he is aware of two St. Louisans who were in Haiti at the time of the earthquake. One of them, Dee Leahy, runs People to People, a local charity organization that aids impoverished children in Haiti. Leahy called her husband to tell him that she was uninjured, says Corbett, but that the house where the children were in was destroyed. Miraculously, everyone everyone escaped alive.

Phillip Geartner, a St. Louis native who has lived in Haiti since 1990, is still missing along with a scholar from the University of Iowa, says Corbett.

The pair were supposed to spend a night in the area around the epicenter of the earthquake. Corbett says Geartner, who worked as a pest exterminator when he lived in St. Louis, went along on a couple of his Haiti trips in the late '80s before deciding to move to the Caribbean country permanently in 1990.

Over the years, Geartner became known around Haiti as "Doctor Phillipe," says Corbett, for performing first-aid procedures on Haitians with no access to health care. For now, all Corbett can do is stay glued to his computer, eagerly awaiting news from friends and colleagues. 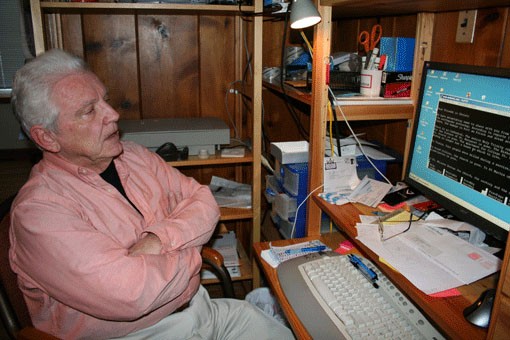 Photo: Emily Good
Corbett on Tuesday scanning emails from people in Haiti.
"It's crazy. Nobody knows the full picture. Everybody is locked into a certain space because they can't move around," says Corbett.

Corbett's email inbox been churning with more incoming messages from people in the worst-hit areas.

In an email sent around 10:30 a.m. yesterday, a College of William & Mary student provides Corbett with his personal observations of the chaos in Haiti.

this is landon yarrington - i'm at the UN base in PAP, don't have much time.  everything is a mess, and the term is "tout ayiti kraze!" was in delmas when  the quake hit, returned to the friends i was staying at, and found the house  completely leveled. everyone is thankfully safe. i tried rounding up injured  ppl into one spot, an open space on delmas 17, ruelle verna.

when i left to find UN last night, more than 200 ppl had gathered, and the message kept spreading to round everyone hurt into one safe location. a medical student  named samuel did what he could. many people died. digi-cel towers are down, but voila seems to work, or did work last night.

the palais national is in  shambles, and a haitian at the gate told me the cathedrtal fell too, but don't know if it's true. the haitian security forces guarding the UN gates  have not been allowed to leave and see if their families are alright - the  whole UN base is now on lockdown.

there was a small tremor this morning, and i'm praying it's still aftershiock.   the US sent coast guard airplane to do recon all over the city, and four generals from the DR have arrived. the UN base here has set up a small  triage area, which i'm helping translate for them. most of the haitians  they've let in seem to know english well though.....  the UN base is supposedly currently out of water and rations, and the police forces which are stationed here, along with the rest of the UN foreign staff, mostly europeans, sit and smoke cigarettes and suck their teeth at  the fact that the Caribbean Market and hotel montana have completely been  domolished, nevermind the singing, crying, and praying haitians outside.

there was a large meeting supposedly at the hotel christophe yesterday, with a chinese delegation and top members of the minustah, who have all perished when the hotel collapsed. don't know what's next, but an american police  officer has said that USAID and relief groups have begun rolling in. i will try to check back in later, no promises, because as of last night,  the CO of each UN base had to drive to the other to talk since their communications were down. UN communication seems better.