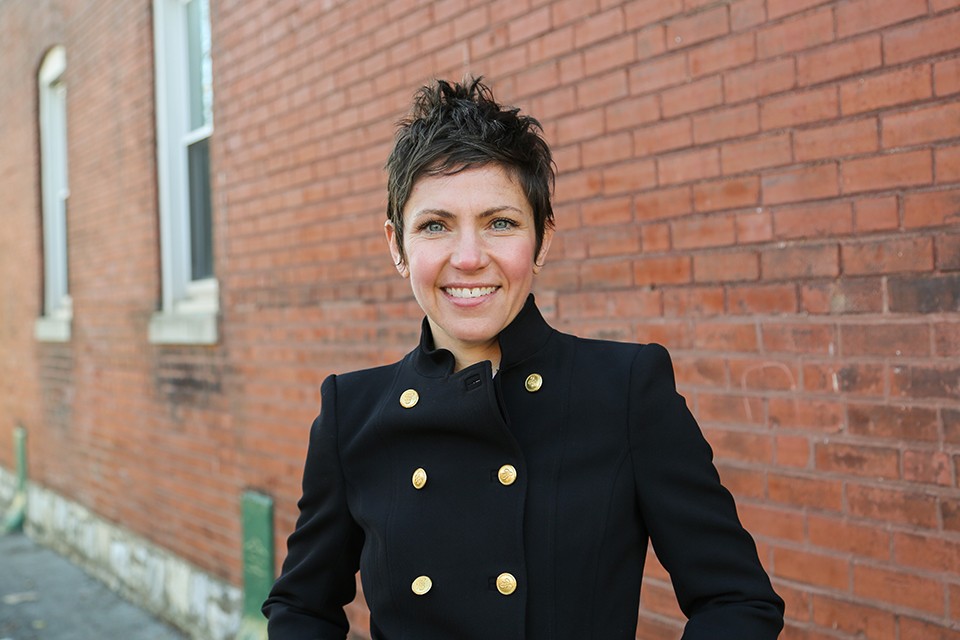 Cara Spencer, 42, began her tenure as 20th Ward Alderwoman in 2015, at a time when Lewis Reed was finishing this third term as board president and Tishaura Jones had already spent four years as a state representative and was well into her new job as city treasurer.

Spencer's opponents may have decades more political experience, but she's quickly built a reputation as a city watchdog against the mishmash of economic development priorities that have long toxified the city's legislative body. It's an arena where the go-to strategy involves pouring tax incentives into development projects that, in the process, deprive the school system of revenue.

"It was just so emblematic of how the city goes about its business, in a vacuum, siloed off and with a short-term game in mind," Spencer says. "We go in without any sort of risk analysis, or even valuation of the project."

"Instead," she fumes, "we took the easy route."

The airport privatization fiasco ended in 2020, with Lambert remaining under city operation. Along the way, it became an example of a kind of collaborative dysfunction that turns St. Louis government into a wasteful, pointless spectacle.

It also demonstrated what a St. Louis mayor can do, and what chaos they can produce: The aborted flight to privatization started in late 2017 as one of the final acts of outgoing mayor Francis Slay, who entered the city into an agreement with free-market enthusiast Rex Sinquefield; in turn, the billionaire hired the high-priced consultants needed to prepare, market and eventually lease St. Louis' airport to a third-party owner.

The idea, supposedly, would net the city $1 billion and fix all its economic problems. A successful lease would trigger a lucrative payback for Sinquefield and the consultants, while also enriching the operators' lobbyists — a cast that at the one point grew to include a certain former St. Louis mayor and private-sector attorney named Francis Slay.

Slay's role, along with the seemingly legalized kickback scheme to Sinquefield, horrified Spencer. That's not the sort of deal a St. Louis mayor should make, she says.

"The mayor should run an agenda, a set of priorities, a clearly articulated vision for the city," she says, explaining that her agenda would tackle public safety with "a regular accounting of policies and revisions" as the city worked to reduce violent crime and "increase an investment in our community that needs it most."

Further distinguishing Spencer from her opponents, the alderwoman has run a notably aggressive campaign towards Lewis Reed.

"The Reed record? Cronyism, corruption and crime that's out of control," intones a 30-second ad that started airing last week. The narration continues as news clips about airport privatization and the city's homicide rate flashing by. The ad abruptly pivots to crime victims talking about their losses — "Politicians like Lewis Reed had their chance," one man says, after describing the death of his son — and ends on Spencer facing the camera, delivering her pitch: "No matter where you live in St. Louis, I'm committed to keeping you safe."

Spencer defends the ad, saying that Reed bears responsibility for failing to address the rise in violent crime during his long tenure in government. Even before the current campaign, Spencer and Reed had publicly tangled on airport privatization and, that same year, the city's approval of a $64 million bond to renovate the Scottrade Center for the Blues, consigning city dollars to benefit a team currently worth $530 million.

Still, Spencer says she supports Cure Violence, the recently launched anti-violence strategy principally backed by Reed, though she believes it would work most effectively paired with "focused deterrence" — a strategy briefly piloted in St. Louis in 2012. The plan involves focusing police and other resources on the small number of people in an area "at high risk for being involved in violent crime."

As with many things about St. Louis, Spencer laments the lack of planning that pervades the city's efforts to affect the quality of life for some 300,000 residents. Reed, she alleges, has proven himself an obstacle, not a problem-solver.

"We have no discernable agenda," she says of the board under Reed. "It is dysfunctional beyond my wildest imagination. He has been at the helm all these years, and what do we have to show for it?"

Still, the next St. Louis mayor is going to face challenges much bigger than past clashes.

There's the issue of the Workhouse, which Spencer supports closing. The next mayor will also face the aftermath of the pending closure of seven schools, despite having no direct control over the St. Louis Public Schools system.

Solutions will take a lot of planning, requiring long-term moves and thorough analysis, Spencer says. All four candidates agree on that — but Spencer argues that she's the one who has most proven she's not just principled but is willing "to do the work."

St. Louis has a wealth of problems; that's certain. But where there's a plan — and a mayor to guide it — there could very well be a way. Spencer wants to be the one to get it there.

"We have got some real structural issues, and the fact that the region hasn't grown in four decades is problematic," she says. "I have tremendous hope for St. Louis. We have phenomenal architecture, our human capital is fantastic, our culture, the people who live here and just the amenities that we have — we're sitting on a goldmine."