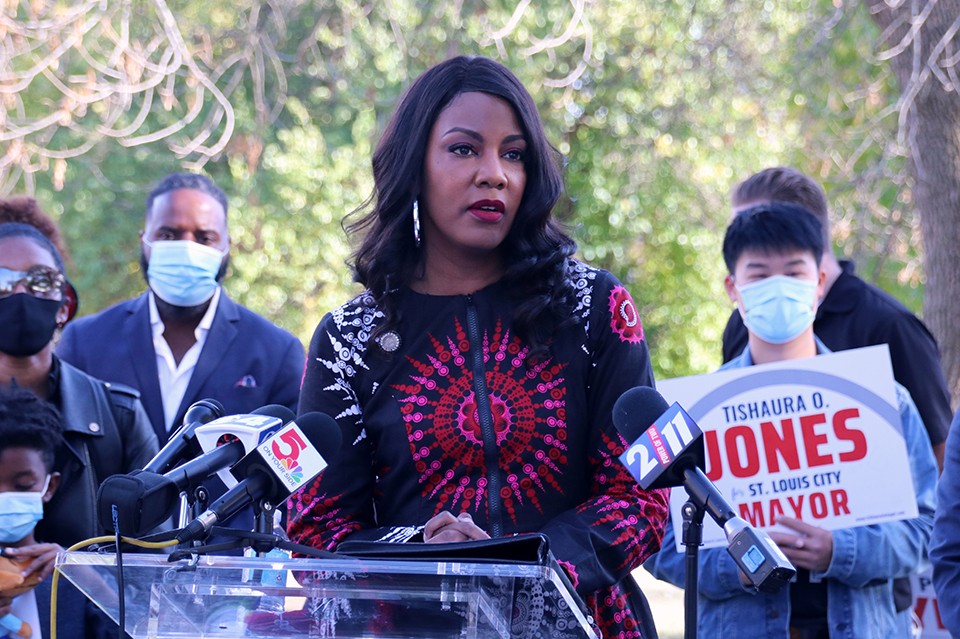 No one was more afflicted by St. Louis' old election system than Tishaura Jones.

In March 2017, the all-important Democratic primary swelled with seven candidates, stretching the election to its absurd breaking point as five sitting public officials — among them Alderwoman Lyda Krewson, Board of Aldermen President Lewis Reed and Jones, the city treasurer — vied to see who would be the first St. Louis mayor of the 21st century not named Francis Slay.

In such a divided field, Krewson needed just 32 percent of the vote to beat Jones, who missed the mayorship by a hair's breadth of 879 votes. Jones' supporters groused at what could have been — if only their candidate had competed against Krewson directly, or at least in an election that didn't feature as many candidates as days in the week.

Four years later, Jones is coming off her third win as treasurer. In the same election, St. Louis replaced the Clay dynasty in the U.S. House of Representatives with activist and protester Cori Bush. Voters also reelected Kim Gardner to circuit attorney despite a strong opponent and bitter opposition from St. Louis' largest police union.

"It sends a strong signal," Jones, 48, says of the 2020 contests. "The people who showed up for that election believe in the leadership of Black women to lead our city and region forward."

Still, Jones acknowledges that she can't help but view the struggles of Krewson's administration through the what-if lens of hindsight.

It was that way on the morning of February 6, when 117 inmates in City Justice Center overtook two of the downtown jail's units, smashed fourth-floor windows and seized the attention of a stunned city with homemade banners and small fires.

Hours later, Jones took to Twitter to address the uprising. "Had I been Mayor back in 2017," she wrote, "we wouldn't be in the situation we are in today."

In an interview, Jones granted that the revolt had been preceded by months of pressure over pandemic crowding, with conditions worsened by the stalled legal system that lengthened the stays of those awaiting trials and court hearings.

Still, she stands by her statement. In an alternate St. Louis under a Jones administration, she says "We would have been tackling the root causes of crime more aggressively since 2017. We would be preventing people from even entering the system in the first place, and working with the Circuit Attorney's Office on some real, tangible criminal justice reform."

In that universe, it would have been Mayor Jones, not Krewson, to face the burst of protests in late 2017 after the acquittal of a cop charged with murdering a suspect.

"We wouldn't have been 'kettling' protesters," Jones continues, referring to a police-engineered mass arrest that encircled protesters and uninvolved downtown residents during a night of demonstrations. Those swept up by riot police included an undercover officer named Luther Hall, who later sued the department over a brutal beating delivered at the hands of his fellow officers.

"This is why the city had to pay Luther Hall $5 million," she adds, punctuating her point. In her view, the status quo of public safety in St. Louis has to stop, not just because of the tangible losses in settlements and embarrassment, but because of what it costs in trust.

Of course, Jones isn't running to be the mayor four years ago. The St. Louis of today has enough problems.

As with all the candidates, her platform highlights public safety. Like the plan put forth by fellow candidate and alderwoman Cara Spencer, it features a rollout of a "focused deterrence" plan, though Jones' platform describes a model to wrap police services into a "community-first" strategy that would include "social service providers, prosecutors, faith organizations and local businesses" to stem the city's violent crime.

But Jones has distinguished her campaign on other issues. She has made decriminalizing sex work a written part of her platform, and her plan for reallocating the Workhouse budget includes redirecting millions of dollars to substance abuse programming.

Despite the setbacks, Jones maintains the Workhouse needs to close. Still, with the Criminal Justice Center in crisis (including Public Safety Director Jimmie Edwards' revelation that "the locks don't necessarily lock"), she has concluded that can't happen as fast as previously planned.

The jail's delayed closure is just another example, she says, of the way St. Louis "kicks the can down the road," a dynamic that compounds failures as city leaders wait to react to whatever next thing they haven't prepared for.

"When we talk about the things that are plaguing St. Louis, we seem to have an either/or, or scarcity mentality," Jones says. "We need to have a mentality that we can handle and concentrate on multiple things at a time."

To Jones, the solutions aren't hiding in new plans or commissions — she lists several reports published by coalitions and non-profits over the past six years, thousands of pages of analysis devoted to policing, economic development and the racial inequities between the city's south and north.

"That's the paralysis of analysis," Jones quips. "What we need to do is take those calls to action, put them together in a strategic plan and go forward with dates and deliverables."

Some challenges still loom unaddressed. Jones cites the seven planned school closures amid an ongoing decline in student population. St. Louis, she says, "has not been a good partner with our school system."

While the mayor can't change school policy directly, Jones says the mayor's office needs to be an actual presence in the school system and its future, a genuine partner, not a distant voice that wanders into the classroom long after the bell has rung.

It's the call to service that Jones says would make her mayorship unlike anything in the city's history, and not just because she'd be the first Black woman to lead it.

"People always say they want change, but they don't," she says. "So, we have to be transformational in our approach, and that's about leadership."

It's like that Bible verse, she suggests, the one about "pressing toward the mark."

"How do we keep pressing forward? You just have to keep pushing," she adds. "Because we know that bigger, and better, is indeed possible."