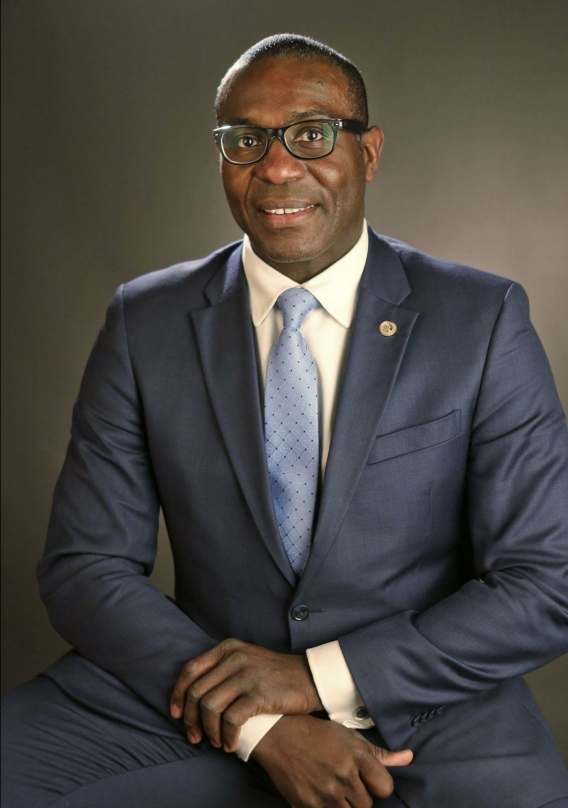 The Board President: Lewis Reed

Lewis Reed, 58, might be St. Louis politics personified. In 2019, twenty years after first taking office as a 6th Ward Aldermen, he won an unprecedented fourth term as president of the Board of Aldermen. It's a position he compares to "second-in-command of a massive corporation" — though it is uniquely powerful in its own right.

From his perch in City Hall, Reed has managed to carve his own path, controlling committee assignments and the flow of lawmaking while also holding one of the three key votes on the city's ultra-powerful budgetary board.

But while he is one of the most powerful figures in government, Reed says he understands residents' worries about the historic rise in homicides and the distrust between crime victims and police. He acknowledges that constituents are frustrated with a government he's been part of for decades.

It's a frustration that he says he shares.

"Getting new things adopted and implemented in the city is something you can actually get done in that mayor's office," he says. "Part of the challenge is breaking through some of these traditional ways and the ingrained things that have kept us stagnating for so long."

Reed pushes back on any notion that he's underused the power of his present office. In a government system reliant on coalitions and soft power, he says that as board president, "you don't have the power to enter into a magazine subscription on your own."

Things would be different in a Reed administration, Reed says. He mentions the long-struggling efforts to deploy body cameras to the city's officers, which had stalled for years before rolling out at the end of last year. "The mayor could do that in a day," he charges.

As board president, he says, "I've done everything in my power to lay the groundwork to put these things in practice. And if you have a mayor that has no understanding, it's taking someone and plopping them in the seat of an F-15, and they have no idea how to fly a plane."

Then again, Reed tends to be his own pilot — and his mercurial style has alienated potential allies in the city's legislative and executive branches. For instance, in the city's contentious exploration of airport privatization, Reed played wildcard as he bounced between obstacle and booster, his machinations separate from those of Mayor Lyda Krewson.

After Krewson officially killed the privatization effort — amid opposition that the plan would gamble the city's most valuable asset while pouring millions into the pockets of conservative billionaire Rex Sinquefield — Reed led attempts to resurrect it as part of a scheme to force the city to lease the airport's operations in exchange for, supposedly, $1 billion in improvements to north city. (After publication, a spokesperson contested this description, saying that Reed filed a board bill to put privatization on the ballot as a response to an outside petition process that eventually was withdrawn under legal concerns.) The plan never got off the ground.

Still, Reed maintains that he can marshal the powers of the office to action. "I think it's clear that my leadership style lends itself better to coalition building," he says.

But when conditions change, Reed believes that walking away from a coalition you helped build can be the right thing to do. Take the efforts to close the Workhouse, the city's maligned medium-security jail, which costs the city $8 million to run annually. While both Tishaura Jones and Cara Spencer say flatly they would close the facility if elected, Reed has traced a dizzying path of positions: First opposed, Reed later joined the activists and sponsored the unanimously passed board bill to close the Workhouse by the end of last year.

That didn't happen. Amid prison officials' concern about overcrowding during a pandemic and a succession of riots and uprisings at the city's other jail, Reed snapped back to what he argues is a more pressing reality — avoiding the spread of infection and potential unrest in the jails — than the one backed by criminal justice reformers.

"The world has changed," Reed says, "Anyone who says they would automatically go in Day 1 and close the Workhouse couldn't be more irresponsible."

What remains unchanged for Reed, through his decades in government and multiple mayoral runs, is his focus on violent crime. He spent years boosting the "Cure Violence" program, which rolled out this year with teams of "violence interrupters" deployed to the city's most violent neighborhoods.

Reed often talks about the effects of violence on his own family. In 1982, his brother was murdered by unknown gunmen in Joliet, Illinois, where Reed had grown up among nine siblings. In 2018, Reed says his nephew was found "shot, killed and left burning in a dumpster in the city of St. Louis." One year later, his son was held up at gunpoint and nearly robbed close to the family home in Compton Heights.

"I've co-hosted candlelight vigils for all these families. I've attended the funerals. I take that stuff very, very personally," he says. "Praying by my brother's hospital bed as he passed away from a gunshot wound to the head — I know what that feels like. And I don't want families to have to go through that."

But the killings continue. The 262 homicides recorded in 2020 nearly broke the single-year record set in 1993, while some 70 percent of cases go unsolved. Reed says he wants to see an expansion of the Cure Violence program to stop killings before they happen; he also supports additional funding for the "Justice for St. Louis Families Fund" which provides $10,000 awards for tips that lead to homicide arrests.

He acknowledges, though, that things need to change in St. Louis. The city can't afford to repeat its last decade of violence and City Hall gridlock.

"This is what drives me to run for mayor," he continues. "The city is very, very slow to change. And it's going to take someone sitting in that executive role that has the understanding, the motivation and ethic to change it."