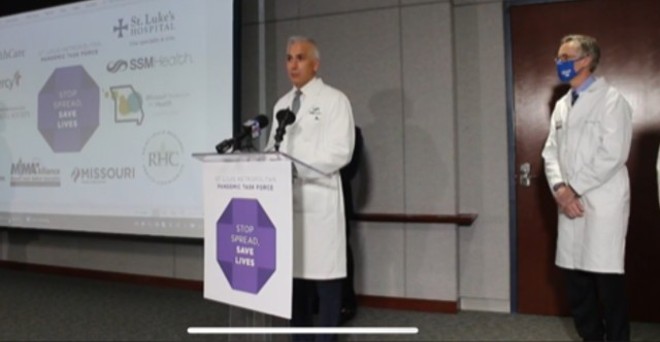 
The worst is yet to come.

Dr. Alex Garza, incident commander for the St. Louis Metropolitan Pandemic Task Force, delivered a bleak report on the spread of COVID-19 as patients from across the state fill hospitals that are rapidly nearing capacity.

"We know we're still going to get hit," Garza said during a Friday briefing. "The question is how much and how long."

The variable, according to Garza, rests with the state's leadership. He and a coalition of doctors, nurses and hospital representatives from across Missouri pleaded with Gov. Mike Parson to impose a statewide mask mandate and other basic measures to slow the spread. If Missouri continues on its current path, with hospitalization graph lines bending to nearly vertical, hospitals will overrun intensive care unit capacity by the first week in December, Garza said.

Coronavirus deaths neared 3,500 in Missouri by Friday afternoon, but once ICUs hit max capacity, the consequences will spiral out, health experts predict. Garza said we'll see what doctors call "excess deaths," people dying of other unrelated ailments because hospitals and health care workers will be stretched too thin to properly care for everyone.

"Our health care workers have fought valiantly day after day, but we have no reserves," Garza said, choking up. "We have no backup that we can suddenly muster to come in and save the day. If we stay on the path that we're on even just two more weeks, we will not have the staff we need to care for patients."

During Friday's briefing, Garza said seven-day averages for hospitalizations have hit new highs in recent days, tripling what they had previously thought were unsustainable levels. He called on Parson to impose a statewide mask mandate and issue a "safer at home" order, which would restrict travel outside the home to essential trips for things like work and picking up food.

But Parson has repeatedly stiff-armed health experts' requests for leadership at the state level, preferring to leave it to counties, cities and small towns to create their own rules. The result is a patchwork of rules that vary across the state. Municipalities, and even individual businesses, that have implemented mask rules have had to battle on their own the anti-maskers who've been encouraged by a number of political leaders who've been hands-off or even outright hostile to masking.

"Telling families they can't gather for Thanksgiving in their private home is unacceptable and only something a tyrant dictator would do," tweeted the far-right politico whose district includes west and south St. Louis County. "I will be having #Thanksgiving with my family. Come and get me @DrSamPage."

Telling families they can’t gather for Thanksgiving in their private home is unacceptable and only something a tyrant dictator would do. I will be having #Thanksgiving with my family. Come and get me @DrSamPage. #MOLeg @StLCountyRepub @SaintLouCo


Doctors at Friday's pandemic task force briefing were asked about dealing with not only an out-of-control virus, but elected officials and a swath of the population that continues to actively resist their advice on even basic ways to combat a deadly pandemic.

"The individuals who say it's their personal liberty not to put a mask on are actually doing something that's a fundamental violation of what we consider the norms of society," Dr. Clay Dunagan said at the briefing. "There's nothing about our country that says it's OK for people to do things that put other people's health at risk."

He said he understands the desire to gather in large groups for Thanksgiving, but the risk is too great.

"Gathering for Thanksgiving is something wonderful," Dunagan said. "I have four kids and nine grandkids. I would love to be with all of them over the Thanksgiving holidays, but in doing that we increase the risk that one or more people in that group will contract COVID and will take it to some other place and infect someone who is at risk of a serious outcome."

Convincing others to make that sacrifice — or even that the virus is real and serious — is difficult. Dunagan said the people who don't believe in the evidence of the virus' spread demonstrate why statewide orders are crucial.

"They've already seen and dismissed the science," he said. "It's up to us to find mechanisms to compel these people to help us save lives."

Garza said they've had to learn to craft their message to reach audiences that aren't swayed by statistics showing the growing threat.

"We argue with data; a lot of people argue with emotion," he said. "And so we have to be able to craft the message for both of those — for the logic side and the emotional side. We're clinicians, we're scientists. We look at the data, and we're like, 'Of course, that makes sense.' But we know we have to convince other people in other ways."

Garza said it would make a big difference if the state's leadership spoke with one voice and explained to their constituents what needs to be done. He doesn't think a mask mandate is too much to ask to save lives.

"I don't, I don't understand sometimes why it's this difficult," he said. "But we all need to be doing the right thing. History will judge us. It's time. It's time to do it."