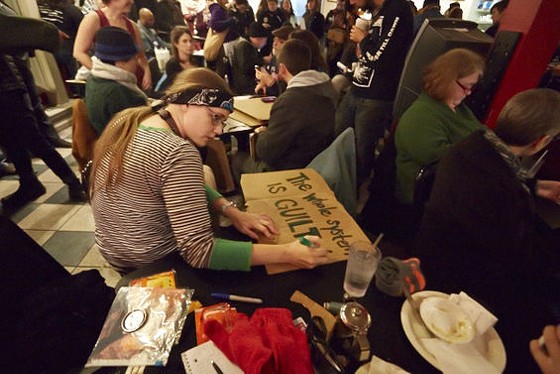 Anyone who has gotten even a whiff of tear gas can attest to its compelling, awful effectiveness. Seriously, the stuff works great as a crowd-dispersal weapon. But it drifts. It blows in the wind, "just like smoke from your barbecue grill," says St. Louis Metropolitan Police Chief Sam Dotson, who watched the thick white clouds wafting across South Grand Boulevard during the frigid, early morning hours of November 25. The cloud was moving toward MoKaBe's coffeehouse.

Hours earlier 80 people gathered in the coffeehouse to listen to an audio stream of St. Louis County Prosecuting Attorney Bob McCulloch as he declared that a grand jury would not indict Darren Wilson, the Ferguson cop who shot and killed unarmed teenager Michael Brown in August. Following the announcement, stunned TV audiences around the world began seeing footage of the of mayhem sweeping across Ferguson.

However, comparatively few were aware that around 1 a.m. St. Louis police deployed waves of tear gas on South Grand Boulevard in St. Louis to drive away window-breakers and vandals. According to Dotson, MoKaBe's, a self-designated "safe space" was simply caught in the crossfire.

The use of tear gas has been harshly criticized since August when police first used it to clear streets in Ferguson. Daily RFT has previously reported the lingering damage wrought by tear gas deployed in residential areas, where it seeps into cracks in buildings and underneath doors. In mid-August, former Riverfront Times reporter Ray Downs captured video showing how officers fired tear gas at Ferguson residents standing in their own back yards.

Further condemnation arrived after MoKaBe's was gassed last week. In a blog post, Amnesty International -- whose observers were stationed inside MoKaBe's that morning -- said the gassing of a coffeehouse "underlines our previous concerns about its unnecessary or excessive use."

Was just in a cafe full of people resting from the #Ferguson protests when police shot tear gas at safe space pic.twitter.com/ZI73DxcCpD

But for Dotson, the issue of whether it's right or wrong to deploy tear gas comes down to keeping the peace.

"MoKaBe's wants to think that they are center of the universe. This was not about MoKaBe's, this was about safety and security on Grand," he tells Daily RFT. He notes the 21 businesses whose windows were smashed not long after hundreds of protesters temporarily shut down Interstate 44 farther north on South Grand. Police reportedly made 21 arrests that night, which included five people charged for property damage, four for burglary and one for lighting fires.

So, Dotson continues, when officers wearing riot gear took up position near MoKaBe's at the intersection of Arsenal Street and South Grand Boulevard and ordered everyone in the area to leave -- citing "unlawful assembly" -- the purpose was to stop the vandalism, dumpster fires and destruction.

"We don't go to tear gas right away. We said over a loudspeaker, 'This is an unlawful assembly, please leave the area,'" Dotson says. "This is where people lose focus a little bit. When the order to disperse is given, it applies to everyone. People always say, 'It's not me, so I don't have to leave.' The challenge for law enforcement is that we don't know who the good guys are or who the bad guys are, because the bad guys intermingle with the good guys."

But officers were likely aware that MoKaBe's was full of people when the tear gas was deployed. Eyewitness accounts from that night and video taken at the scene show dozens of protesters standing on the patio, sidewalk and street outside at MoKaBe's while chanting, in clear sight of the police line blocking the entrance to South Grand.

Dotson confirms his officers fired canisters of smoke and tear gas in a half-block radius around South Grand and Arsenal in order to root out the vandals striking businesses a block south, such as St. Louis Bread Co., FedEx and AJ & R Pawn Shop.

Some of the later tear-gas salvos were filmed by a bystander. In the video below, you can see officers shooting canisters down Hartford Street. (Skip to 13:10.)

Dotson says that if people didn't want to experience the gas, they should have cleared the area.

That's not how things felt for those inside the coffeehouse, says Valeria Souza, a lecturer at Washington University who had arrived at midnight with two other friends after hours spent protesting in Ferguson.

"It was this white cloud directly in front of the building, and it was getting thicker and thicker, because they kept deploying additional gas canisters," she says. "And then all of a sudden it it was so thick you couldn't see in front of you. We could see this giant, white thick cloud, impenetrable, and it starts coming toward us."

The cloud can be seen in this video taken by activist DeRay McKesson.

The police just gassed MoKabe's! We are inside! #Shaw https://t.co/LZta4yFyx9

Continue for the rest of Souza's narrative of getting tear gassed inside MoKaBe's.