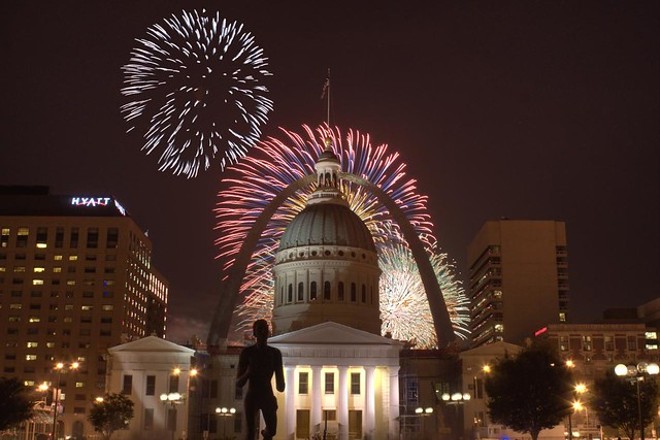 VIA FLICKR/Timothy K Hamilton
Last month, St. Louis police vowed to crack down on illegal Fourth of July fireworks in the city. But they didn't manage to issue many citations.

Indeed, according to the department, officers logged just 30 reports related to arrests for fireworks on July 4 — although spokeswoman Evita Caldwell suggests that the number could be higher, noting in an email that "the number [of arrests] is still preliminary at this time."

The crackdown was announced last month in a June 19 Tweet. In it, the department referenced the St. Louis City ordinance that prohibits discharging fireworks within city limits and vowed, "Offenders will be issued summons, and fireworks will be seized."

But while that happened to a few dozen folks, that doesn't mean St. Louis enjoyed a quiet Independence Day. Anecdotally, south city still transformed into a booming battleground of amateur explosives, with plenty of complaints on social media that St. Louis Police had been all talk and no action.

And in one instance, it appears that the revelers in the south city neighborhood of McKinley Heights took things even further. According to local TV reports, a huge crowd used Sigel Elementary School as a staging ground for their own fireworks show, leaving mounds of charred shells and scorched sidewalks for residents to find the next morning.

One resident, who spoke to KSDK (Channel 5), claimed that he watched around 100 people set off fireworks on school property, all while "there was a police officer parked in the parking lot as well as a fire truck. But they weren't stopping it. They were just here."

July 4 was also a bad night for one particular bus driver, who was shot with a Roman candle while driving a route in north city near Bellefontaine Cemetery. The St. Louis Fire Department tweeted that the driver was treated for non-life-threatening injuries.

In summation, it appears the police crackdown on fireworks still needs some work.

In other news: Dumpster fires remain a lost cause.